According to an Apple Insider report, AR evangelist Robert Scoble believes that Apple will launch a new user-centric web search engine similar to Google, but not until January 2023. Rumours of Apple creating a rival to Google are nothing new, but they aren’t common either. Now, Robert Scoble has been detailing everything he thinks Apple is about to launch. 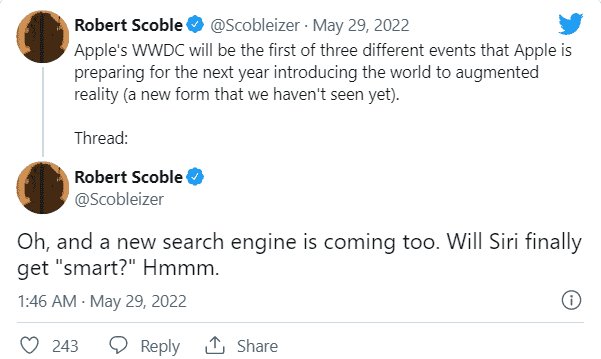 Scoble didn’t provide further details in his Twitter post. However, he did say it was based partly on conversations with sources and partly on inference. Earlier, Scoble claims that the company would unveil its “VR-based Apple Glass” at WWDC22. There is a precedent for the Cupertino firm to replace Google services. It eventually did by ditching Google Maps in favor of its own Maps, though it didn’t start well.

Also, Apple does already have a search engine that supports Siri and Spotlight. So it doesn’t seem like a big deal for the company to expand into a full universal search service to rival Google Search. If Apple launches its own universal search engine for users, it could lose a fortune. According to previous reports, Google should pay Apple $15 billion in 2021 to remain the default search engine on iOS. If accurate, the deal is equivalent to 15% to 20% of Apple’s annual profit in 2020.

At the time, it was suggested that Google pay the fee to avoid losing its share of its default search engine to Microsoft Bing.

According to MacRumors, WWDC will be online again this year. However, there are a few lucky developers who will be part of the event at the Apple Park campus. Apple has shared a new “Beyond WWDC” page, listing community-led events that will take place during or after WWDC from June 6 to June 10.

Next Tesla purchased the world's largest casting machine for its Cybertruck