In the contest for North America’s most popular mobile browser, Safari defeats Chrome. According to Bankless Times’ report, Apple’s Safari Browser has a 50 percent market share in the North American mobile browser industry. Google Chrome, its closest competitor, controls 43.91 percent of the market.

“Safari has earned this dominance by keeping up with the evolution of the internet,” says Jonathan Merry, BanklessTimes’ CEO. He continued, “The browser has adapted itself to meet changing user demands and expectations. It has several stand-out features that endear it to many users.”

Safari is one of the safest browsers on the market today. Apple’s pro-privacy position gives it that quality. All browsers now include privacy and security capabilities that allow users to block data trackers.

This feature protects users from annoying advertisements. Even huge internet companies like Facebook and Google have expressed dissatisfaction with the function. Many other businesses, including the pair, rely significantly on advertising revenue. 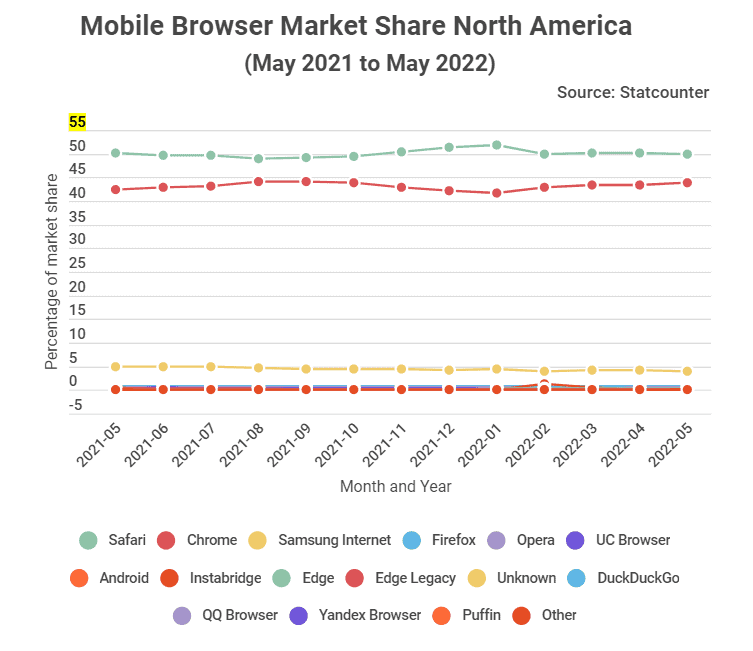 Safari’s compatibility with Apple devices such as the iPhone and iPad is another plus. All Apple products include the browser as the primary internet search software. The iPhone is still the phone of choice for the majority of Americans (up to 55 percent, according to some estimates), explaining Safari’s dominance in the mobile internet market.

Safari’s popularity is also due to its quickness when compared to other browsers. It consumes less memory and does not significantly slow down the performance of your device. Users may reach Siri by touching their home button one more. Finally, its user-friendly surfing experience and iCloud sync capabilities have been strong selling points.

Despite Safari’s dominance in the mobile and tablet market, Chrome is still the most widely used browser. It controls 51% of the market, according to current statistics. With a 33 percent hold, Safari falls to second place. With a market share of 5.66 percent, Microsoft’s Edge browser ranks in third.

When it comes to the PC sector, the disparity is more evident. Google’s market share is a whopping 59.72 percent. Safari is a distant second, with 14.19 percent of the browser market share. Following closely behind is Microsoft’s Edge browser, which has a market share of over 12%. Finally, Firefox, with a market share of 6.81 percent, is the other major browser.

As the various competitors continue to improve their products, the browser “wars” will undoubtedly increase. It’s unknown if Safari and Chrome will be able to unseat the others from their perches. But one thing is certain: this will be a thrilling struggle to witness!

Next The Mail App Gets Long-Awaited Features in iOS 16