POCO has been introducing a plethora of super-budget smartphones under the C-series in recent years. Now, the company has decided to introduce the POCO C40 across global markets. The device has actually been introduced first in Vietnam, but now, is reaching a global audience. It’s a super-budget smartphone with a chipset that is not very familiar. The focus here is on less demanding users that need something to go across social media and messaging apps.

Despite the modest specifications, the phone actually has a large display. It has a 6.71-inch diagonal with an LCD panel of HD+ resolution. The design formula uses a waterdrop notch for the selfie camera. Moving around to the back we have a square camera module that houses two snappers. The POCO C40 counts with a 13 MP main camera and a 2 MP depth sensor. These are modest snappers, but the focus here isn’t photography. The phone’s back also serves as a house for a fingerprint scanner, and it’s a relief to see that the sensor is not being committed here for face unlock.

The processor of this chipset is not made by a popular chipset maker, not even by the trending Unisoc. Instead, we have a JR510 made by Shanghai-based JLQ. Well, this only proves that the Chinese semiconductor segment is starting to flourish. The chipset has four 2 GHz cores and four 1.5 GHz cores, there is also a Mali-G52. Apparently, the performance is comparable to the MediaTek Helio G35. Or the Unisoc T606. The phone has two variants – one with 3 GB and 32 GB, and another one with 4 GB and 64 GB. It supports micro SD cards for further memory expansion. 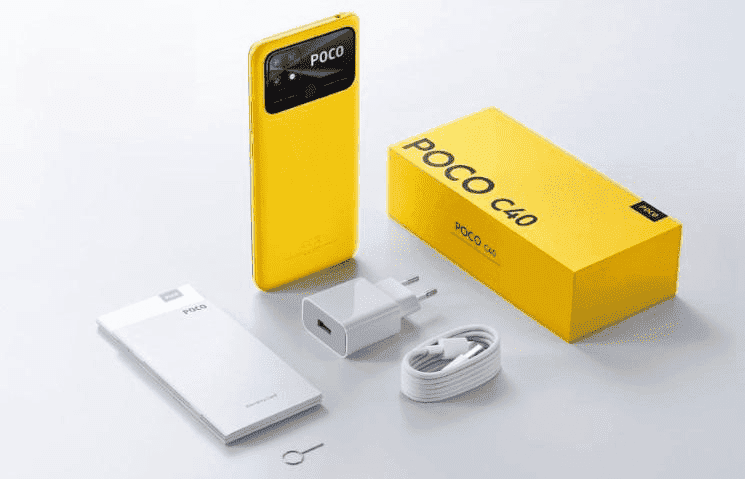 The phone’s biggest highlight is the battery capacity. The POCO C40 draws its powers from a 6,000 mAh battery with 18 W fast-charging. However, the charging brick coming with the phone only has a 10 W output. So if you want it to take less than 2 hours to charge, you’ll need to buy a separate 18 W charger.

The POCO C40 sells in Black, Green, and Yellow. According to the company, pricing will vary by market. Worth noting, that POCO will make one of its biggest moves of 2022 in the coming days with the release of the POCO F4 5G.

Previous Samsung Galaxy F13 might be a rebranded Galaxy M13

Next Facebook App Will Get A TikTokish Feed Based On Recommendations