The tipster Digital Chat Station already revealed that July will be an intense month for smartphone enthsuasits. As per his report, smartphone OEMs will launch one device after another with the Snapdragon 8+ Gen 1 SoC and Dimensity 9000 series. Xiaomi kicked the balls with the Xiaomi 12S series, and ASUS kept pace with the release of the ROG Phone 6 series today. As previously leaked, iQOO will also join soon the party with the release of the new iQOO 10 series. The lineup is said to bring the iQOO 10 and iQOO 10 Pro. Today, the company has confirmed that the iQOO 10 series will bring the Snapdragon 8+ Gen 1 SoC. We don’t know if that means that the Dimensity 9000+ variant is discarded, but until now the reports suggest it will be at the helm of the vanilla variant. 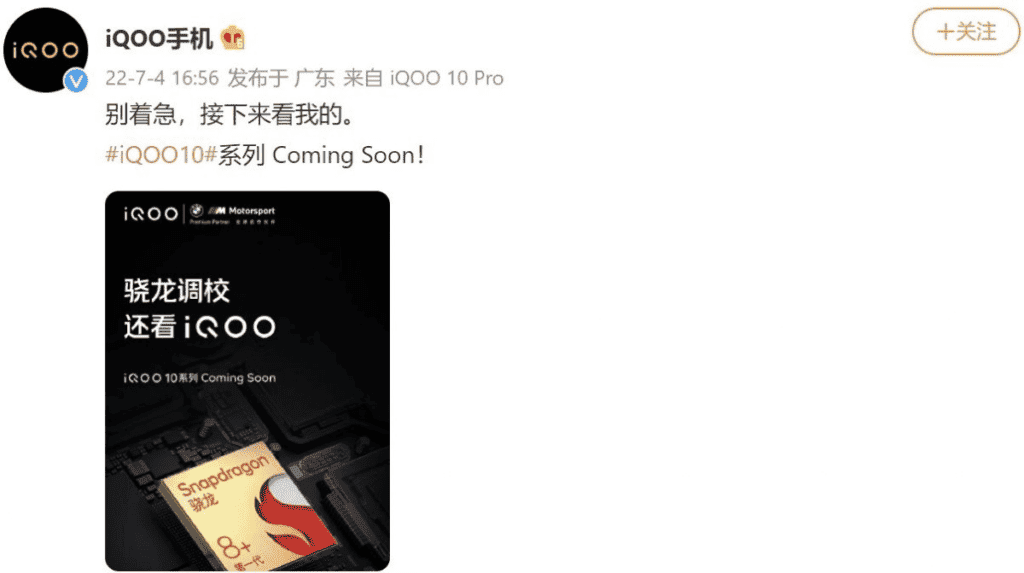 Unfortunately, the company is keeping a low profile when it comes to revealing details on the iQOO 10 series. The company indirectly confirmed the iQOO 10 Pro variant, which is likely the one with the Snapdragon 8+ Gen 1 SoC. The vanilla, on the other hand, will bring the recently unveiled Dimensity 9000+ chipset. There are also rumors on an SE variant, but there is no consistent proof pointing to this right now.

We don’t know if the iQOO 10 series will debut the Snapdragon 8+ Gen 1 SoC in this family. After all, the company has confirmed a new iQOO 9T smartphone for India with the same SoC. It will probably fill the gap in the Indian market, as the 10 series is likely to stay in China for a while. The vanilla is yet to have its details confirmed, but the iQOO 10 Pro already got its TENAA certification.

According to the Chinese regulatory agency, the iQOO 10 Pro will bring a 6.78-inch AMOLED screen with Quad HD+ resolution. The device also has up to 16 GB of RAM and 512 GB of Internal Storage. There will be two 50 MP cameras, and a third 14.6 unit. The device will draw its powers from a 4,550 mAh battery. The “lower-than-usual” capacity comes due to the rumors pointing to the 200 W fast-charging debut. If that is the case, the iQOO 10 Pro will be the fastest charging smartphone in the industry. The icing on the cake is the 65 W wireless charging support.

We expect more details to appear soon, as the company will likely build the hype for the imminent launch. Worth noting, that renders of the BMW edition emerged a few days ago.