Earlier this month, Xiaomi presented the Xiaomi 12S series to the world. The Xiaomi 12S Ultra was the star of the show with an impressive camera setup. The camera setup is the fruit of the combination of a good camera with Leica professional optical lenses and software solutions. Xiaomi makes it clear that the camera is jointly developed by itself and Leica. Apart from the superb camera quality, the device will also impress with its long-standing battery life. Xiaomi’s founder and CEO, Lei Jun, praises the battery life of this smartphone.

The executive replied to certain users that have been reporting a very good battery life on their Xiaomi 12S Ultra. According to Lei Jun, the “Battery life of Xiaomi 12S Ultra is so strong, and there is also a credit for Xiaomi’s self-developed chips: Xiaomi Pengpai P1 and Xiaomi Pengpai G1 (Surge P1 and Surge G1)”. Lei Jun states that the company is applying the BMS concept of electric vehicles to mobile smartphones and is making a mobile phone battery management system. There are three main benefits: accurately predict charging and battery life, improve battery safety and health, and improve battery life. 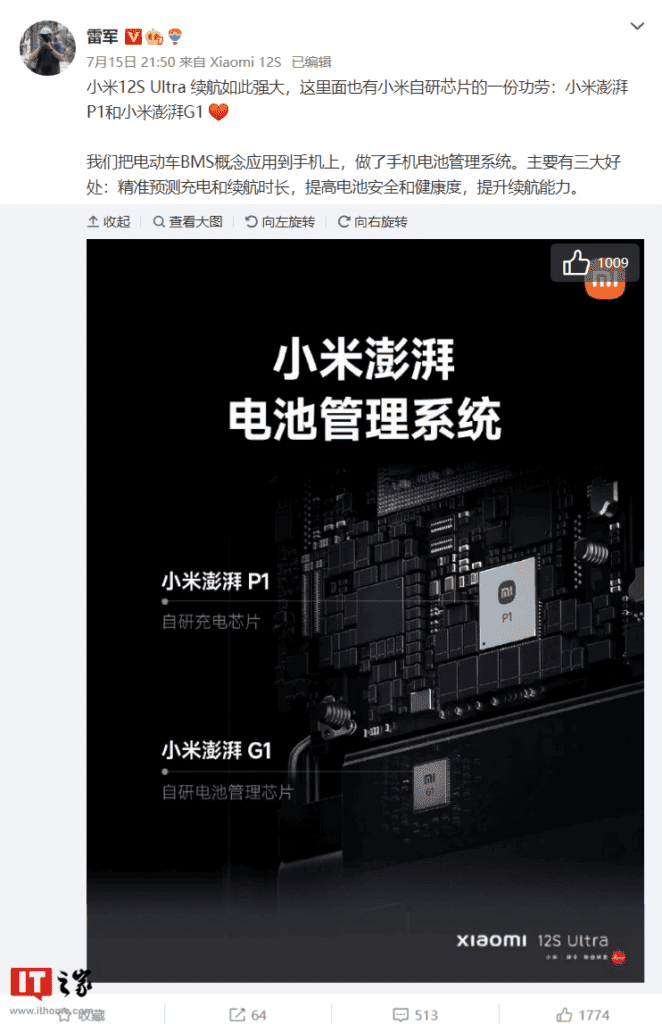 Xiaomi already revealed that the new chips come for the “Xiaomi Surging Battery Management System”. The Xiaomi Surge G1 stands for battery management, while the P1 is a fast-charging chip. They extend the battery life and greatly improve the charging efficiency. Talking about the battery quality of the Xiaomi 12S Ultra, it uses a second-generation silicon-oxygen anode battery with a capacity of 4,860 mAh and a DOU battery life of 1.24 days.

Worth noting that the new Xiaomi 12S Ultra also packs the Qualcomm Snapdragon 8+ Gen 1 SoC. It’s a revamped version of the processor using TSMC’s 4nm manufacturing node instead of Samsung. The processor has 30 percent more energy efficiency. The device also has a leaf-pulse cold pump cooling system to keep thermals on the green.