The competition for the title of Game of the Year 2022 seems to have become more fierce. After all, the upcoming “Xenoblade Chronicles 3” is another possible candidate. The upcoming RPG debuted in the top 15 of the year on Metacritic. Of course, this is just the beginning, and the game can even get more positions in the next few weeks.

As one of the most anticipated games of the year, “Xenoblade Chronicles 3” will be officially released this Friday (29). The game is exclusive to Nintendo Switch and is already emerging as one of the strong candidates for Game of the Year, thanks to its score of 89 on Metacritic.

Metacritic currently counts the review scores of multiple websites across the world. The platform evaluates games, theater movies, and even TV shows. However, when it comes to the upcoming RPG, there is a big consensus: Xenoblade Chronicles 3 is the peak of the 12-year franchise. The game definitely is a masterpiece from Monolith Soft, the developer of the franchise. Summing up, the game so far has amassed 65 reviews on Metacritic. Hence, this generates a score of 89. After all, it’s an average of 62 positive reviews and only 3 mid opinions. Unquestionably, it’s one of the best scores in the platform’s story. 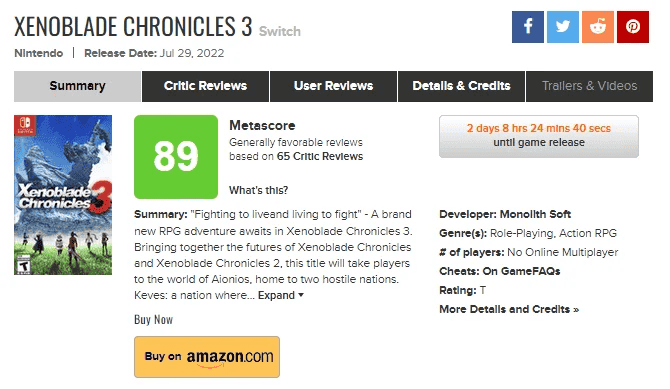 A few weeks after the Xenoblade Chronicles 3 launch, the platform will open for user reviews. In addition to the websites’ reviews, the users’ reviews may also affect the score. The year still has some months left, but we can already say that Xenoblade Chronicles 3 is the best candidate to win the RPG Game of the year award at TGA. The game may concur with the “The Game of the Year” contest, however, it will definitively get the best RPG award. After all, there weren’t many candidates in the genre this year.

The game will definitely push the sales of the Nintendo Switch forward. The hybrid console is about to break PS4 sales and become the king of the eighth console generation. This happens while the rumors of a Nintendo Switch Pro start to grow again.