Since the official release of its first-ever foldable smartphone, Xiaomi Mi MIX Fold back in March 2021, the company is yet to unveil a successor for this device. However, as the days roll on, the launch date for the Xiaomi MIX Fold 2 is drawing closer.  In recent leaks, the design of this smartphone has been exposed. The images of this device reveal that it will come with a centre punch-hole design. However, there is no obvious punch-hole in the inner screen. Recent reports from popular Weibo tech blogger @DCS claim that the Samsung Galaxy Z Fold 4 and Xiaomi MIX Fold 2 will go head to head in the market. According to his report, the Samsung Galaxy Z Fold 4 will be official soon and the Xiaomi MIX Fold 2 will arrive in about the same period. 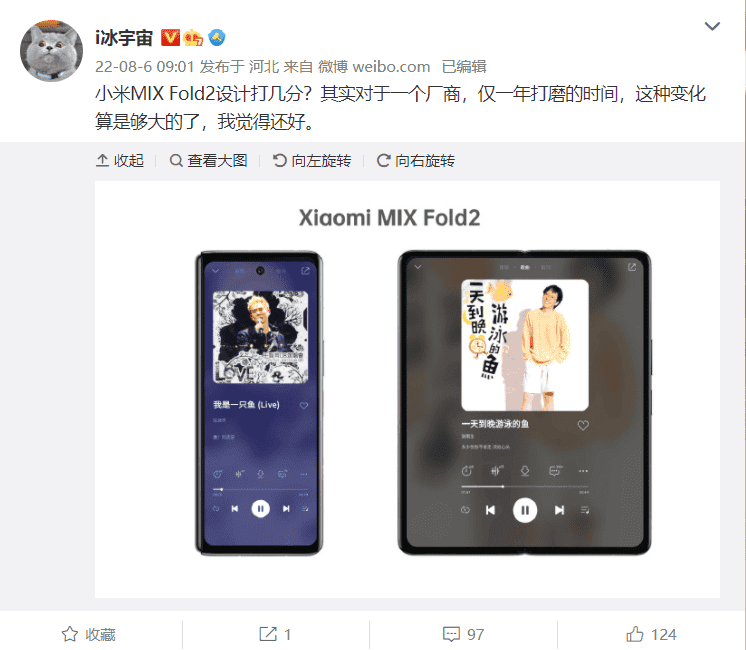 Recently, Xiaomi’s two new Snapdragon 8+ Gen 1 smartphones completed three certifications. Among them, the 22061218C model device is expected to be the Xiaomi MIX FOLD 2 foldable smartphone. Furthermore, the 22081212C should be the Redmi K50 Ultra mobile phone (expected to be released in August). From the speculations so far, the Xiaomi MIX Fold 2 foldable smartphone will have up to 12GB of RAM and 1TB of internal storage. There will be two options including a 12GB + 512GB and 12GB + 1TB storage. As for the Redmi K50 Ultra, it will have a 12GB + 256GB option as well as an 8GB + 128GB storage option.

Previous reports regarding this flagship foldable smartphone reveal that the codename of this device is “zizhan”. This device comes with an 8-inch display, which is not much different from the iPad mini’s 8.3 inches. The external screen size is 6.5 inches and it can fold in both directions.

There are reports that this flagship foldable smartphone from Xiaomi will come with a Snapdragon 8+ Gen 1 chip. Furthermore, this device will support a 2.5K LTPO 120Hz high refresh rate on internal and external screens. One of the major challenges of foldable smartphones is the crease. According to speculations, this new foldable device from Xiaomi has decent control of the crease and it changes the external screen and the hinge design. This upcoming foldable smartphone is only a little thicker with the charging port on one side. However, this device is relatively thin when you place both sides of the device together.

In the camera department, the Xiaomi MIX Fold 2 will come with a 50-megapixel outsole sensor. This flagship camera sensor supports Leica images and also supports Dolby Vision HDR video shooting. As of now, we can not ascertain the quality of the output images of this device. However, with Leica’s cooperation, we expect the camera of this device to be pretty decent.

Furthermore, there are also reports that the Xiaomi MIX Fold 2 will use Xiaomi’s internal Surge C1 chip. The processor has a dual filter configuration, which can realize parallel processing of high and low-frequency signals. Also, with this processor, the signal processing efficiency is increased by 100%. With the self-developed algorithm, the 3A (AF, AWB, AE) performance of the image is greatly improved.

With all these specifications improvements, we also expect the price of this flagship smartphone to increase. As of now, there is no official information or speculation regarding the pricing of this smartphone.

Next Chipmakers to automakers: it's your turn to pay