As it has done every month for years now, AnTuTu has just published its monthly ranking of the most powerful Android smartphones of the moment. Find out below which are the global most powerful devices of the month of July 2022.

After a ranking dominated by the high-end gaming smartphone Black Shark 5 Pro in June 2022, which was in the first position for the third time in a row. The new ranking of the most powerful Android devices in July 2022 welcomes several newcomers. Which completely turned the podium upside down.

Indeed, the month of July saw the arrival of several smartphones equipped with the new Snapdragon 8+ Gen 1 chip. Qualcomm bumped the core frequencies up to 3.2 GHz on the Prime core, which does help the processor hit record highs on the benchmarks. In addition, the chip can count on TSMC’s more advanced 4nm tech. To earn even more points thanks to its better heat management. 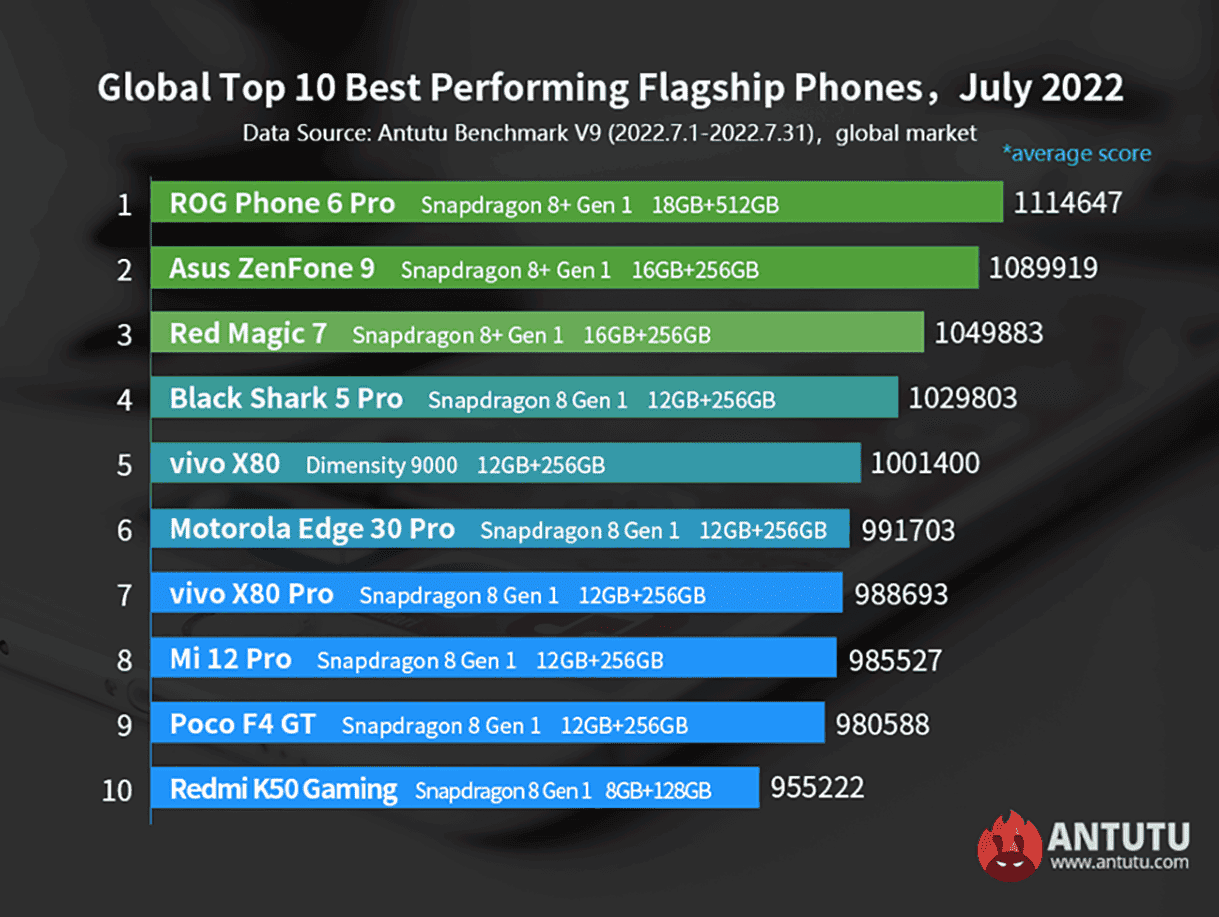 In first place in the ranking in July 2022 with 1,114,647 points, we find the Asus ROG Phone 6 Pro. The manufacturer’s new gaming smartphone equipped with a Snapdragon 8+ Gen 1 processor and 16 GB of RAM. It is closely followed by another smartphone from Asus, the Zenfone 9. As a reminder, this is a compact device with a screen of only 5.9 inches. So it is surprising to see it higher than the third smartphone in the ranking, the Red Magic 7.

The Red Magic 7 already occupied the first position of the AnTuTu ranking last February. But has since received a new version equipped with a Snapdragon 8+ Gen 1. In the fourth position, we find the Black Shark 5 Pro, the leader of the month of June. We then see the presence of several other Android smartphones in this top 10, including the Vivo X80, the Motorola Edge 30 Pro, the Vivo X80 Pro, the Xiaomi 12 Pro, the Poco F4 GT and its Chinese equivalent, the Redmi K50 Gaming.

It should be noted that AnTuTu does not list all the smartphones available on the market. For example, we do not find the recent Xiaomi 12S, 12S Pro and 12S Ultra, yet also equipped with a Snapdragon 8+ Gen 1.

Next Half of Samsung premium smartphones will be foldable by 2025