In June this year, Cloudflare confirmed that there was the largest HTTPS distributed denial of service attack in history. In simple words, it was the largest DDoS attack we have ever seen.  but it successfully stopped the record-breaking attack before any real damage. The company revealed that it recorded attacks of 26 million requests per second.

Recently, Google reported that they discovered a massive DDoS attack. The latter attempted to shut down its Cloud Armor customer service, peaking at 46 million requests per second. This is 176.92% higher than the previous record. So Google’s reported DDoS attack is the largest seven-layer DDoS attack. 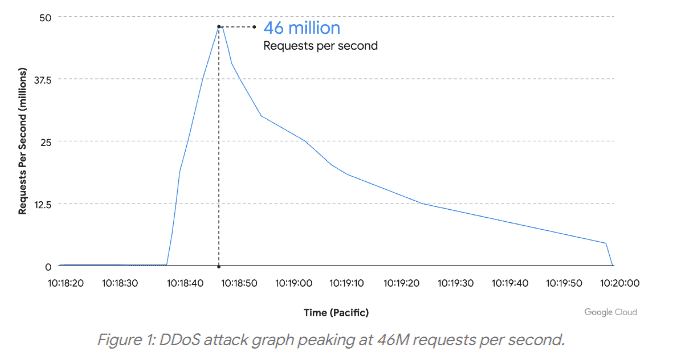 If talking more figurative, at the peak, this attack is equivalent to a full day of Wikipedia traffic in 10 seconds. Wikipedia is in the top ten in terms of website popularity and visits. So this is an incredible feat of stability to withstand such a powerful DDoS attack.

“Today’s internet-facing workloads are at constant risk of attack with impacts ranging from degraded performance and user experience for legitimate users, to increased operating and hosting costs, to full unavailability of mission critical workloads.”

How Google Could Resits This DDoS Attack

Generally, Google Cloud Armor regularly protects applications (layer 7) and websites from such internet attacks. It uses load balancing technology to keep web services running even in the face of these challenges.

In this regard, Google Cloud Armor claims to support more than 1 million query requests per second. However, it turns out they could successfully handle 46 million times per second of the load.

Google reports that Cloud Armor successfully detected the DDoS attack and recommended a rule to customers to block the attack, which worked well. A few minutes later, after the attacker realized it had failed, data requests dropped.

However, Google points out that the number of DDoS attacks has grown exponentially and is being delivered by a large number of malicious bots. So there is every reason to think this record may not hold for long.

Next High-definition cameras are coming soon to flagship smartphones