In a series of tweets, Tianfeng International analyst Ming-Chi Kuo predicts that the ultra-wide-angle cameras of the two iPhone 14 Pro will upgrade to 1.4µm. Recall that the ultra-wide-angle camera of the iPhone 13 Pro is 1.0µm. Ming-Chi Kuo also claims that the unit price of CIS (image sensor), VCM (voice coil motor), and CCM (camera module) has increased significantly in this upgrade, about 70%, 45%, and 40%, respectively. His tweets read 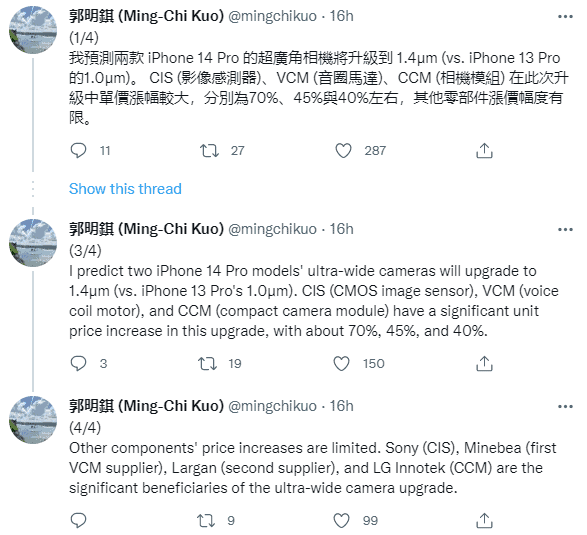 “I predict that the ultra-wide angle cameras on both iPhone 14 Pros will be upgraded to 1.4µm (vs. 1.0µm on iPhone 13 Pro). The CIS (image sensor), VCM (voice coil motor), and CCM (camera module) will see larger price increases per unit in this upgrade, at 70%, 45%, and 40% respectively, while other components will see limited price increases. Sony (CIS), Minebea (VCM I supply), Largan (VCM II supply) and LG Innotek (CCM) are the significant beneficiaries of the ultra-wide angle camera upgrade. I predict two iPhone 14 Pro models’ ultra-wide cameras will upgrade to 1.4µm (vs. iPhone 13 Pro’s 1.0µm). CIS (CMOS image sensor), VCM (voice coil motor), and CCM (compact camera module) have a significant unit price increase in this upgrade, with about 70%, 45%, and 40%.

Ming-Chi Kuo also reveals earlier today that Apple is indeed developing satellite communication for the iPhone 14/Pro series. He claims that the company has completed hardware testing of this function before mass production. 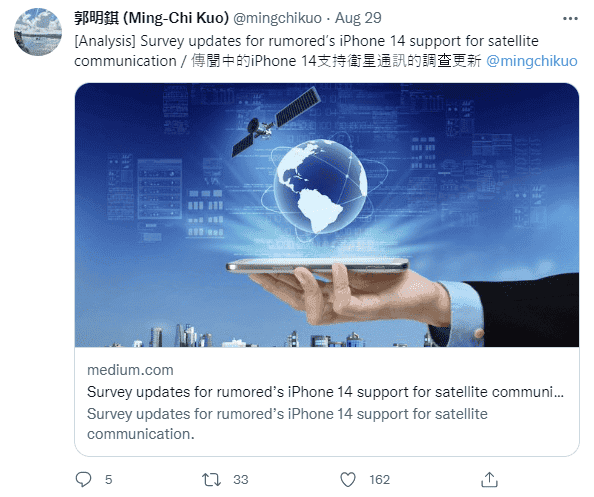 Whether the iPhone 14/Pro series will support satellite communication depends on “whether Apple and the carriers can solve the business model” issue. Earlier revelations show that Apple’s next-generation A16 chip will be exclusive to the Pro and Max models. The iPhone 14 and 14 Max will still use the old A15 Bionic processor. The Apple iPhone 13/Pro series also has satellite hardware. But the connectivity is not active because there are no specific negotiations for the business model.

Bloomberg’s Mark Gurman said in the Power On newsletter that the next-generation rugged Apple Watch Pro may have satellite connectivity. Apple’s autumn conference will be held at 1:00 am Beijing time on September 8. The iPhone 14 series will officially hit the public at this event. After the event, we can know with certainty what the iPhone 14 series will offer in terms of satellite communication.

Coincidentally, Elon Musk’s SpaceX has also recently launched mobile satellite Internet access. It is hard not to guess whether there will be cooperation between the two. However, it is unlikely that Apple’s satellite service provider is SpaceX at present. It is the US satellite communication operator Globalstar, which provides satellite networking services for the iPhone 14. Even if Apple supports satellite Internet access on the iPhone 14, it is not as easy to use when there is no 4G/5G coverage as everyone imagines. It is likely to be just a simple text message transmission, not a large-scale high-speed Internet service.

In addition, Ming-Chi Kuo broke the news that Huawei’s new Mate 50 / Pro series, which will be released on September 6, may provide emergency SMS services through satellite communications supported by the Beidou system.

Next Android 14 beta testing will start after March 2023