Tesla CEO, Elon Musk said on Twitter that Tesla is working hard to allow car owners to play games via the Steam platform on Tesla electric cars. According to Musk, the company is making some progress in the integration of Steam Platform with Tesla cars. There is a chance that the company will make an announcement relating to a demo next month. At present, Musk has not announced the relevant demo. To this end, some netizens asked Musk about the progress of integrating the Steam platform on Tesla. In response, Musk said he was testing it. This means that Tesla has delayed integrating the Steam platform on its cars. 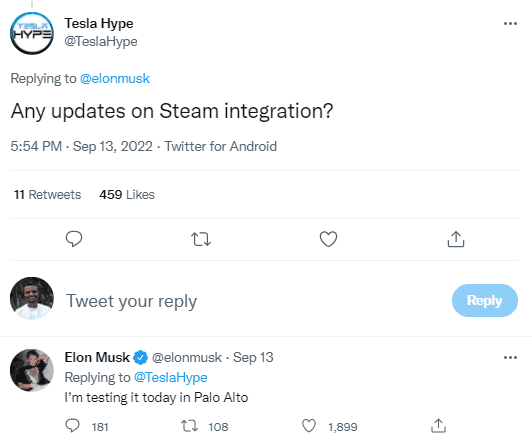 Nevertheless, the company still plans to build a full library of games on Tesla EVs. At the same time, Musk did not announce the specific time that the project will go live. According to electrek, Tesla has a team of software engineers in Seattle working on gaming. Tesla recently started building a similar team in Austin, Texas. Meanwhile, Tesla has been building a gaming platform called Tesla Arcade in its electric cars, and has been porting games to Tesla Arcade by partnering with other game studios.

With the unveiling of the new Tesla Model S and Model X, Tesla claims its platform will perform well enough to rival the latest game consoles and support wireless controllers. From the images from Patrick Schur, Tesla in-car gaming computer will come with AMD Navi 23 GPU. The output images will be directly on the large central control screen and the back screen of the armrest box.

Tesla’s infotainment system runs a custom Linux operating system and relies on a CPU architecture familiar from the desktop PC world. So it’s certainly possible to get a lot of games running on Steam.

Previous OPPO F21s Pro 5G Specs And Price Are Out