Unlike the other companies in the BBK Electronics group, Oppo has been keeping a low profile when it comes to flagships. While we saw new flagships from OnePlus, Vivo, and Realme, Oppo sticks with the Find X5 series. There are reports about the Oppo Find X6 series, but so far, the company is yet to launch anything with the Snapdragon 8+ Gen 1 SoC. Meanwhile, it keeps focusing on the mid-range department with new Oppo A-series phones every month. Back in June, the company revealed the Oppo A77 5G. In August, a 4G variant arrived. Now, it’s time for a new Oppo A77s variant.

The new “s” model is a new version of the Oppo A77 4G. For instance, it packs a different chip – the Qualcomm Snapdragon 680 SoC. This processor is still 4G-only. Moreover, its performance is moderate due to the use of old Cortex cores. You can think of this chip as the 2021/2022 version of the Snapdragon 665 featuring a newer 6nm processor. Anyway, the same can be said of the new MediaTek Helio G99. Apart from the processor, the phone will also pack 8 GB of RAM. More than the other variants.

Apparently, the software will allow you to expand this RAM amount by 2GB, 3GB, or even 5GB. Of course, this will take a portion of the 128 GB Internal Storage. The Oppo A77s has a 6.56-inch IPS LCD screen with a 90 Hz refresh rate and Full HD+ resolution. It brings a waterdrop notch for the 8 MP selfie shooter. Moving around to the back, there is a big rectangle for the dual-camera setup. It comprises a 50 MP main camera and a 2 MP depth sensor. 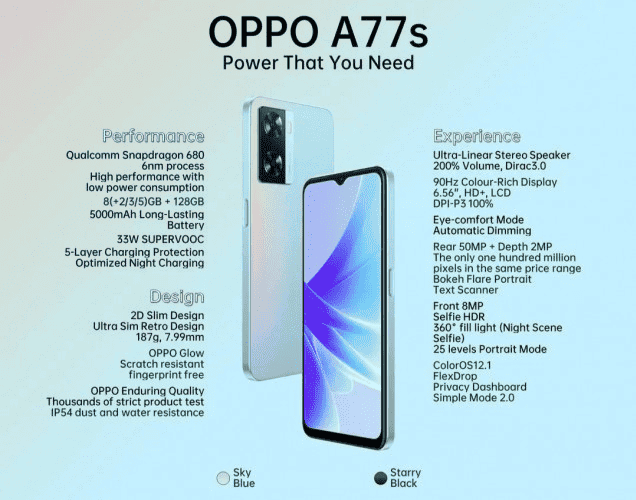 According to the teaser, the Oppo A77s are coming in Sky Blue and Starry Black colorways. However, it’s unclear if the device is also getting a Sunset Orange with the Fiberglass-Leather design. In terms of software, the phone runs ColorOS 12.1 which is based on Android 12. The phone draws power from a 5,000 mAh battery with 33W charging. 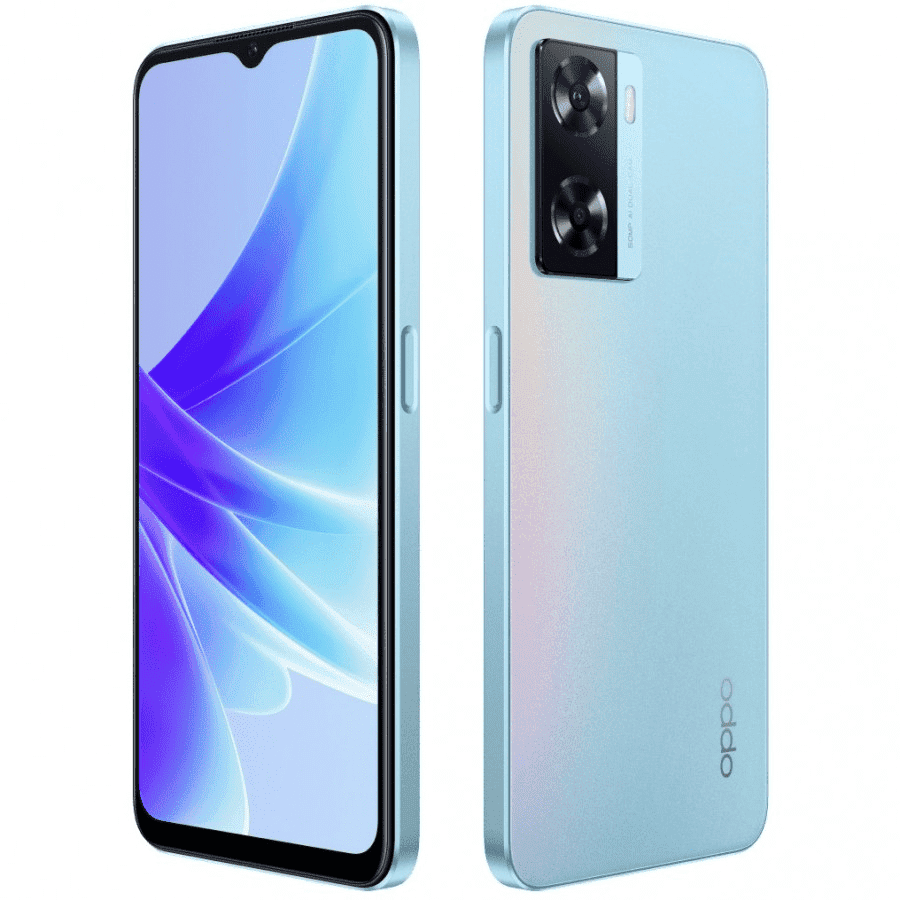 There is no word on a release date for the Oppo A77s. However, it was certified by Thailand, India, and European Union authorities. Therefore, it’s only a matter of time before the phone appears in these regions. You’ll need to keep an eye on the news. After all, Oppo will not make much buzz for a minor launch like this one.