Microsoft claims that after purchasing Activision Blizzard, Sony and Nintendo will remain the “biggest” when it comes to “traditional gaming”. Microsoft Corp. recently launched a new website aimed at expressing what it sees as the benefit of buying Activision Blizzard. This is coming as the deal continues to come under scrutiny by competition regulators around the world. Arguments made by Microsoft include claims that the deal will be “beneficial to the gaming industry”. The company also claims that it will bring greater competition to the traditional gaming space. Of course, in the traditional gaming space, Sony and Nintendo will remain the largest. Microsoft is saying this as proof that its purchase of Activision Blizzard does not get it an unnecessary advantage. It’s not entirely clear what Microsoft means by “biggest”. It could be referring to Microsoft’s belief that Sony and Nintendo will continue to sell more consoles. It could also simply mean that they are the “biggest” competitors.

The tagline for Microsoft’s new site is “Our Vision for Gaming: More Choice and More Games for People Around the World”. It argues that the acquisition will benefit more people than just Xbox owners.

“Players and developers are at the heart of Xbox. We want to empower people to play games anytime, anywhere, on any device,” Microsoft said. “Developers should have more options to build, publish and monetize their groundbreaking games. When we do, we all win. That’s why we’re sharing more about the industry. We are also sharing how our Activision-Blizzard acquisition fits into our gaming strategy.” The site also says that the acquisition will benefit gamers. There will be “more games on more devices, including Xbox, PlayStation, mobile and web”. Referring to Game Pass, Microsoft also claims it will provide more “choice for people to buy games through subscriptions and one-time purchases”, as well as “alternatives to mainstream mobile gaming offerings” on iOS and Android. 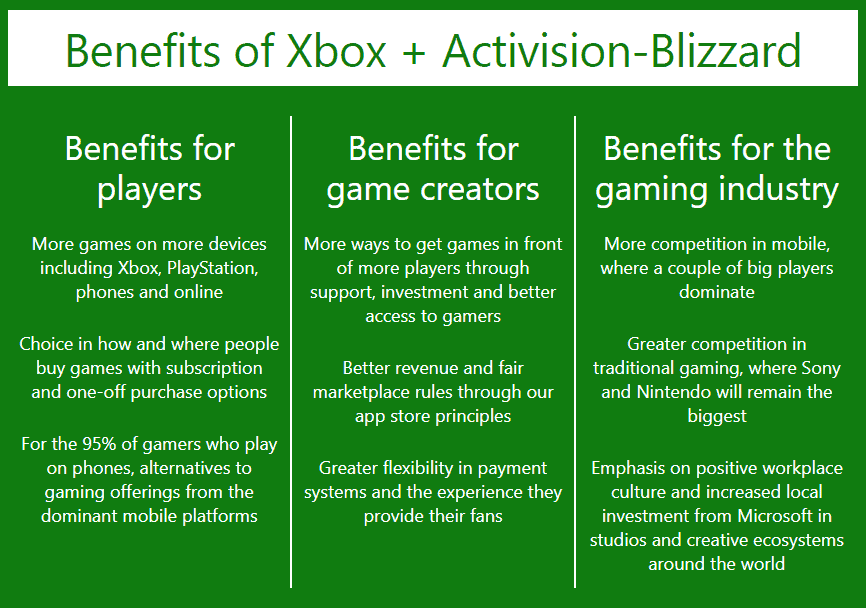 Microsoft claims the deal will bring “an emphasis on a positive workplace culture”. There are currently a couple of reviews on Microsoft’s takeover of Activision Blizzard. According to Dealreporter, the CEO of Sony Interactive Entertainment paid a personal visit to EU headquarters on September 8 to express Microsoft’s concerns about the $68.7 billion acquisition of Activision Blizzard. Its concerns with the deal revolve around future release arrangements for the Call of Duty. This is often PlayStation’s annual bestseller, and whether it will be pulled from their platform.

Xbox boss, Phil Spencer claims Microsoft will offer Call of Duty on PlayStation for a few more years. This is a few years after Sony’s marketing deal with Activision expires. However, PlayStation is not so confident and needs some assurance. The European Commission has set November 8 as a provisional deadline to rule on the deal.