Many users still lack a computer with the setup required by Microsoft to install Windows 11 on it. 42% of them, according to reports, don’t have an eligible machine, a statistic that is especially accurate for businesses. Nevertheless, we observe a higher adoption rate compared to the year’s beginning.

The fact that some users do not want to switch to Windows 11 is one thing. And the thing that some people would prefer to be able to upgrade to the new operating system but are unable to do so due to Microsoft’s system requirements is another thing. In fact, the infamous TPM 2.0 chip requirement on the PC motherboard. Which had a lot of attention when the OS was avaialble, still excludes a lot of users. 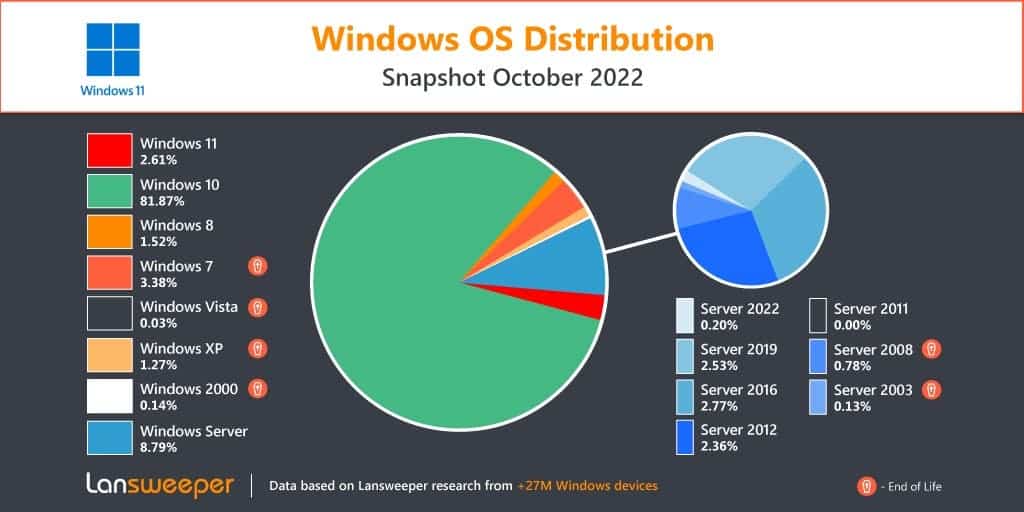 According to the Lansweeper organization, 42.76% of PCs lack a Windows 11-compatible processor. Last year, the latter made up 57.26% of the machines tested at the time. So the improvement is still noticeable, though. Among them, 14.66% lack the TPM chip and 71.5% lack the necessary amount of RAM.

As one might anticipate, the problem is most apparent within businesses, which are hesitant to upgrade their equipment. They take an average of 18 months to adopt a new OS, according to a study by IDC, if they even want to. Roel Decneut, chief strategy officer at Lansweeper, asserts that “wider issues affecting adoption that are beyond Microsoft’s control” exist.

“The disruption in the global supply chain has created a shortage of processors. While many are choosing to stick with the hardware they have at the moment due to global financial uncertainty,” he said. Despite everything, it should be noted that the Windows 11 adoption rate is on the rise, reaching 1.44% last April, compared to 0.25% in January. We bet that in a few months, once the fleet of machines has been renewed. These figures will finally be able to explode.

Next After Australia, Tesla Model Y beat others to the top spot in Germany