The latest report from Strategy Analytics reveals the first 8 days’ performance of the holiday season from September 23 to 30, 2022. The report reveals that India’s smartphone sales revenue increased by 19%. The analysts believe that the increase is driven by a 19% increase in wholesale average selling prices. Samsung leads with a 26% market share, followed by Xiaomi and Realme. 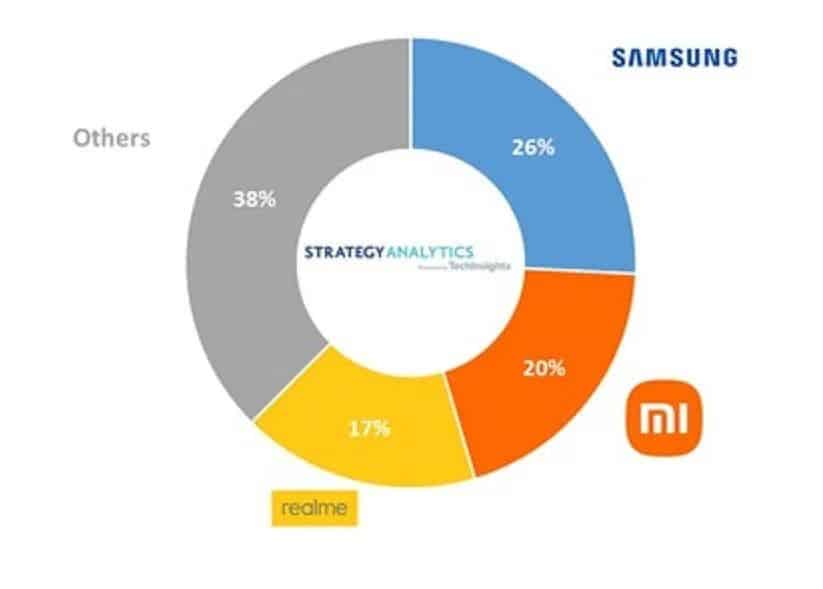 “We estimate that 12.8 million smartphones were sold in the first week of this year’s smartphone holiday promotion season in India, generating revenue of $2.1 billion, up 17% year-on-year,” said Strategy Analytics industry analysts. Wholesale smartphone ASP grew 19% year-on-year, to $165. Compared with low-end mobile phones, this year’s sales are more inclined to mid-to-high-end smartphones. This is one of the reasons for the steady increase in ASP. Due to high inflation and economic recession, sales of entry-level devices declined. It has a 2% decline relative to the first week of last year’s holiday season due to concerns. But higher ASPs offset lower volumes, resulting in solid revenue growth.”

In terms of vendor dynamics and Samsung’s performance, Strategy Analytics says… “Samsung, Xiaomi and Realme are the top three in this holiday season in India. These three brands together account for 62% of total sales. Samsung led the market with a 26% market share in the first week of this year’s holiday promotion season. We estimate Samsung sold 3.3 million smartphones this year. It successfully outpaces Chinese vendors due to good sales in all price ranges. There are attractive price discounts and enhanced channel presence. This time, the biggest discount on Samsung phones is about 40% off the actual retail price. High-end models such as S22 Ultra, S21 FE, S22 Plus, Z Flip 3 have considerable discounts. In the mid-range segment, the Samsung Galaxy F13 and M13 are also heavily discounted and are selling well.”

Commenting on the performance of Chinese brands, a senior analyst at Strategy Analytics adds… “We estimate Xiaomi and Realme will sell 2.5 million and 2.2 million this year, respectively, ranking second and third with a market share of 20% and 17%. Facing huge resistance and a limited channel promotion budget, this year’s performance is weak. Xiaomi gave way to Samsung.”

Next HTC and Etisalat cooperates to develop a Metaverse ecosystem