A recent Canalys study shows a 9% decline in smartphone sales year over year. It’s the worst third quarter since 2014, to put it simply. Sales of smartphones are still declining for the third quarter of 2022, so there won’t be any miracles. Not all manufacturers, though, are in the same situation. Two brands are performing particularly well in this downturn.

According to the report, consumers are delaying the purchase of electronic equipment in favor of more important purchases. Which is how the decline in smartphone sales since the start of the year has been explained. In fact, the dismal state of the economy encourages users to keep their smartphones for longer. 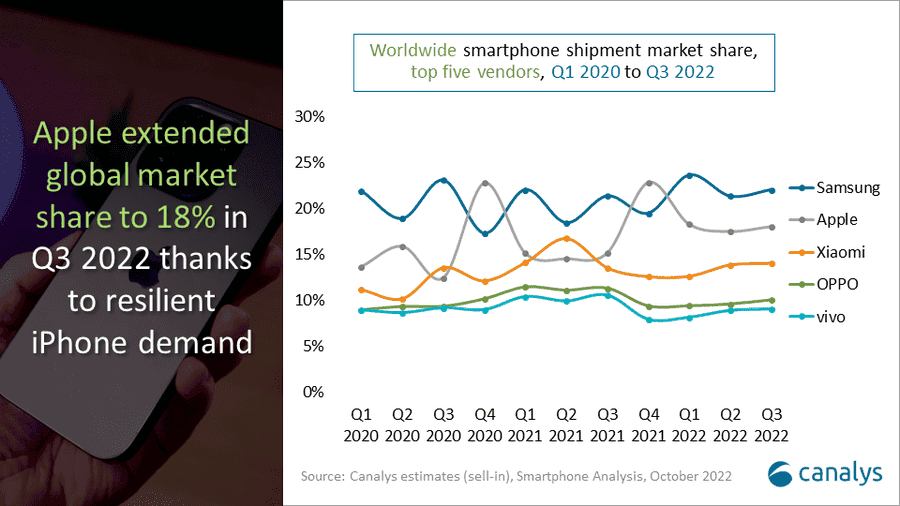 The historic decline in mobile sales is still present, and the six to nine months ahead do not appear to offer any hope of a turnaround, according to the Canalys company. difficult circumstances that force suppliers to adjust to demand by limiting the accumulation of stocks given the weak demand to the greatest extent.

“The smartphone market is highly reactive to consumer demand and vendors are adjusting quickly to the harsh business conditions,” said Canalys Analyst Amber Liu. “For most vendors, the priority is to reduce the risk of inventory building up given deteriorating demand. Vendors had significant stockpiles going into July, but sell-through gradually improved from September owing to aggressive discounting and promotions. The pricing strategy of new products is cautiously crafted, even for Apple. To avoid significant pushback from consumers who now tend to be very sensitive to any price hike,” added Liu.

At the beginning of the school year, the manufacturers ran aggressive promotions to clear out the large summer inventories. So they wouldn’t accumulate products that wouldn’t find buyers.

Meanwhile, some companies haven’t shied away from raising the cost of their smartphones. This approach needs to be “crafted with caution, even for Apple,” according to Canalys, “to avoid a significant setback by consumers who now tend to be very sensitive to any price increase.”

Some brands are not affected 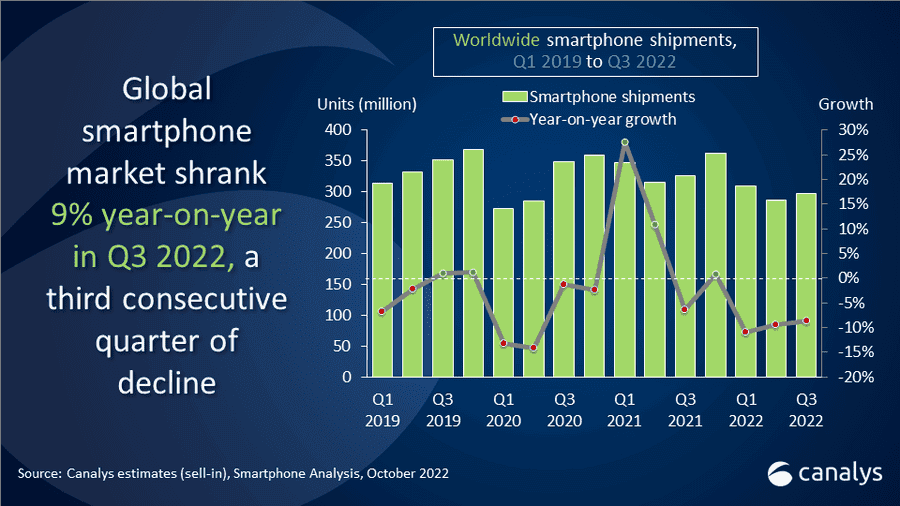 Of course, not all brands are having the same impact by this change in demand. With 22% market share, Samsung maintains its dominant position compared to 21% in the third quarter of last year. The same thing for Apple.

“As demand shows no signs of improvement moving into Q4 and H1 2023, vendors have to work on a prudent production forecast with the supply chain while working closely with the channel to stabilize market share,” said Canalys Analyst Sanyam Chaurasia. “Going into the sales season, consumers who have been delaying purchases will expect steep discounts and bundling promotions. As well as significant price reductions on older generation devices. Compared to the strong demand period of the previous year. A slow but steady festive sale should take place in Q4 2022. However, it will be too soon to see the upcoming Q4 as the real turning point of market recovery.”

The brand from California has experienced the greatest growth. It increased its market share from 15% to 18% in a year. Figures that can be due to the September release of the new iPhone 14. Which boosted demand in the third quarter. With a 14% market share that has remained consistent over the past year, Xiaomi holds onto third place in the manufacturers’ rankings.

The two most affected brands are Oppo. Which is still in fourth place but has seen its market share decline by one point from 11% to 10%. Vivo continues to be fifth but sees a slight decline from 11% to 9%.

According to Canalys, the smartphone market will not experience a turnaround in the fourth quarter. On the other hand, we anticipate that the holiday season and year-end sales will increase demand.

Next Oppo Reno8 Pro House Of The Dragon Edition Is Unveiled