Counterpoint Technology Market Research has unveiled a ranking of the top ten best-selling smartphones in April this year. The top three most popular devices are represented exclusively by Apple devices.

The fourth position is occupied by another Apple device – iPhone 12, whose share was 1.6%. The iPhone SE 2022 model is located on the seventh line with 1.4% of the market. 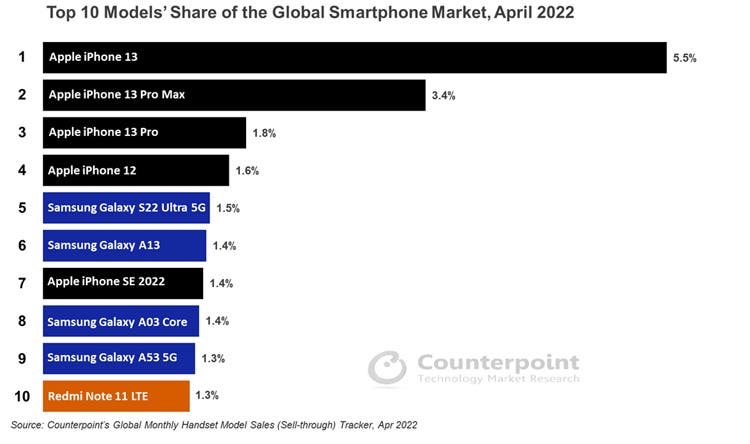 Also, four smartphones in the April Counterpoint ranking are from Samsung. These are the Galaxy S22 Ultra 5G, Galaxy A13, Galaxy A03 Core and Galaxy A53 5G models, which ranked fifth, sixth, eighth and ninth respectively. The shares of these devices were approximately 1.5%, 1.4%, 1.4% and 1.3%.

Closes the top ten devices the Redmi Note 11 LTE, created by the Chinese company Xiaomi. In April, it accounted for about 1.1% of the total sales of smartphones. So, we have three brands in the top 10 smartphone sales list of April 2022.

The month’s best-sellers list saw an increase in the number of 5G-enabled smartphones, rising to a new high of seven models and up from four in the same month last year. The 5G smartphones on the list represent a third of the total 5G smartphone sales. 5G capability has become a standard offering in flagships and its presence is increasing in lower price bands as well.