Microsoft had a rough entrance in the “Android smartphone” segment with the Surface Duo. Is it a bird? a Windows Phone? No! It’s a dual-screen device that runs Android and offers some unique features powered by Microsoft’s portfolio of apps and services. The device certainly conquered its users despite the shortcomings, and Microsoft launched a second generation with improvements. Now, the rumors say that there is a third model in the pipeline. Despite the initial problems, and some delays, the company has been working hard to offer decent software support. That said, it’s rolling out Android 12L for its devices.

Microsoft had a very slow start in rolling updates for the Duo, but apparently, things are improving. The company is rolling out Android 12L, and we know that’s one step behind Google and Android 13. However, that’s much better than the Android 11 build that both devices have been running. Hopefully, the Surface Duo series won’t take another full year to get Android 13. But, the best thing to do is to be patient. 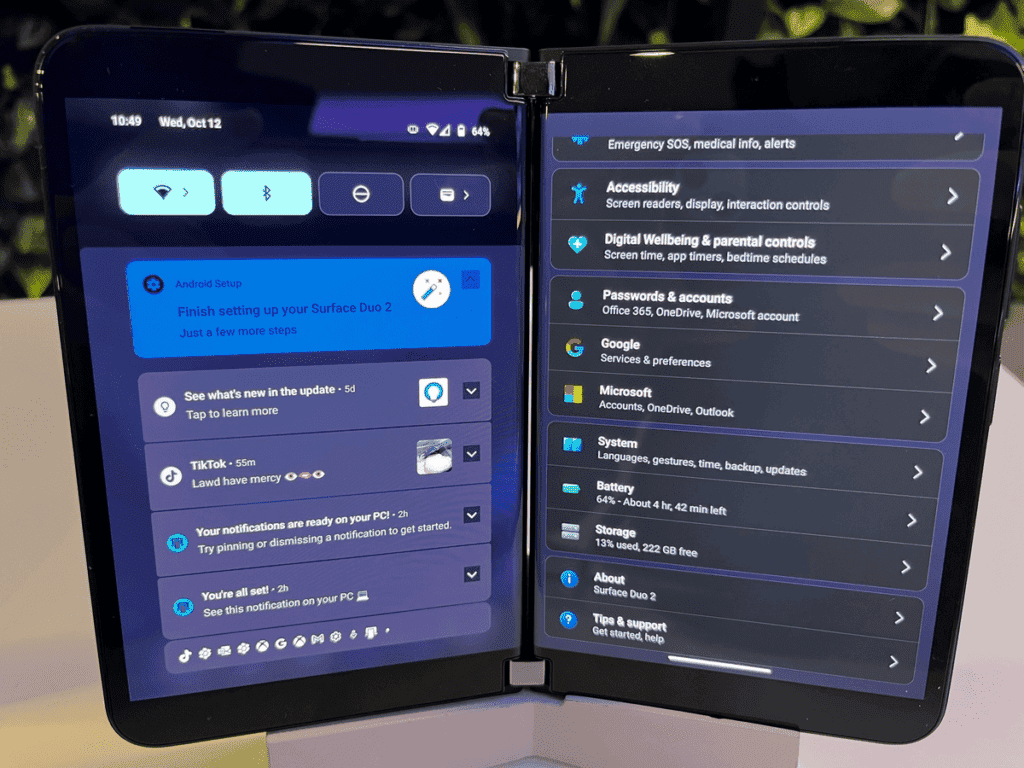 For Microsoft Surface Duo and Duo 2 owners, the present is Android 12L. The update has 3.2 GB for the Surface Duo 2 and 2.6 GB for the first model. You can manually check whether the update is available from the smartphone’s settings. It will take a while to reach all devices, after all, the update seems to be rolling out in batches. The company may also use the initial rollout to make sure that there is no critical bug in the release.

The Surface Duo and Surface Duo 2 are getting Android 12L, and while this isn’t the latest Android version, it’s better than Android 12. After all, the “L” version brings multiple improvements for tablets, foldable, and overall large-sized devices. It comes with Material You, Updated Widgets, Privacy Improvements, and more. The update comes with a radical re-design in the system from what they’re used to. When it comes to Microsoft optimizations, there is a new pen menu. You can trigger it through Surface Slim Pen 2. There are also some Windows 11-style theming, and some bug fixes in this update.

After a long period of waiting, Surface Duo series owners will be enjoying something newer. Unfortunately, there is no word on a possible Android 13 release.