It seems that the mobile processor battle will continue to gain momentum. Users who intend to upgrade their smartphones in 2023 should not worry about the processor. Everything suggests that if it is high-end, it shouldn’t matter too much if the smartphone you purchase has a Qualcomm or a MediaTek processor. The latter just unveiled its new high-end chip for 2023, the MediaTek Dimensity 9200. We already have all the details, therefore we can say with certainty that it is a beast.

Since the Dimensity series hit the market a few years ago, competition between Qualcomm and MediaTek has increased significantly. Its chips are getting more and more comparable, so choosing one requires less thinking. 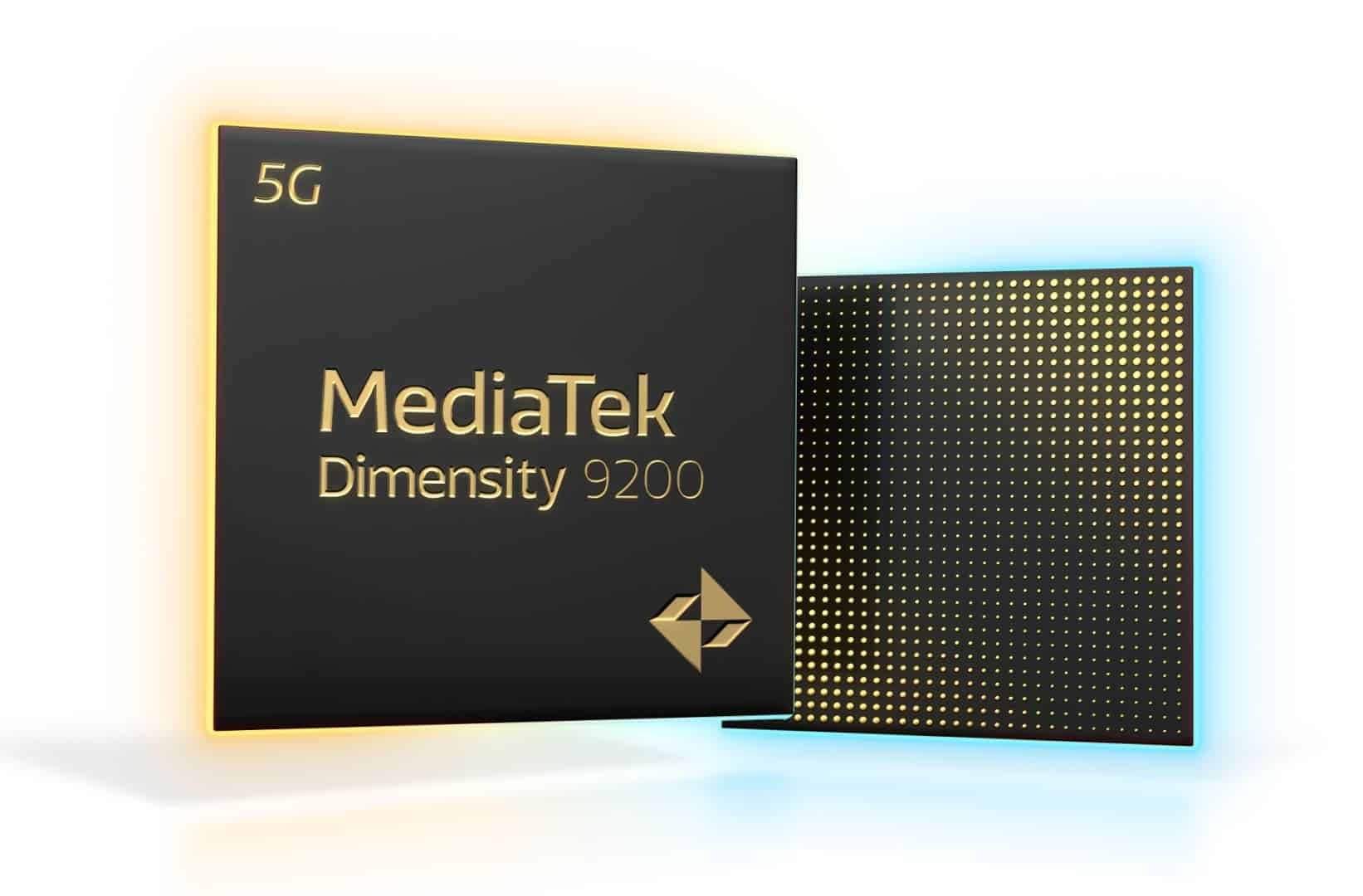 The new Dimensity 9200 has been officially announced by MediaTek. The Dimensity 9000 is replaced by this processor, which is the company’s flagship model. The new chip will be in charge of supplying power to 2023’s high-end smartphones that opt for MediaTek over Qualcomm.

It’s too soon to declare which is superior because Qualcomm will unveil the Snapdragon 8 Gen 2 on November 15. Of course, based on the features listed, we can assume that MediaTek will be able to compete. The Dimensity 9200 offers the following:

If you are unfamiliar with these specs, all you need to know is that they give one of the best technical configurations for the high range and that they improve on every aspect of the previous model. More manufacturers might use this chip because of the mmWave support in regions where that support is crucial and MediaTek has so far ignored it. 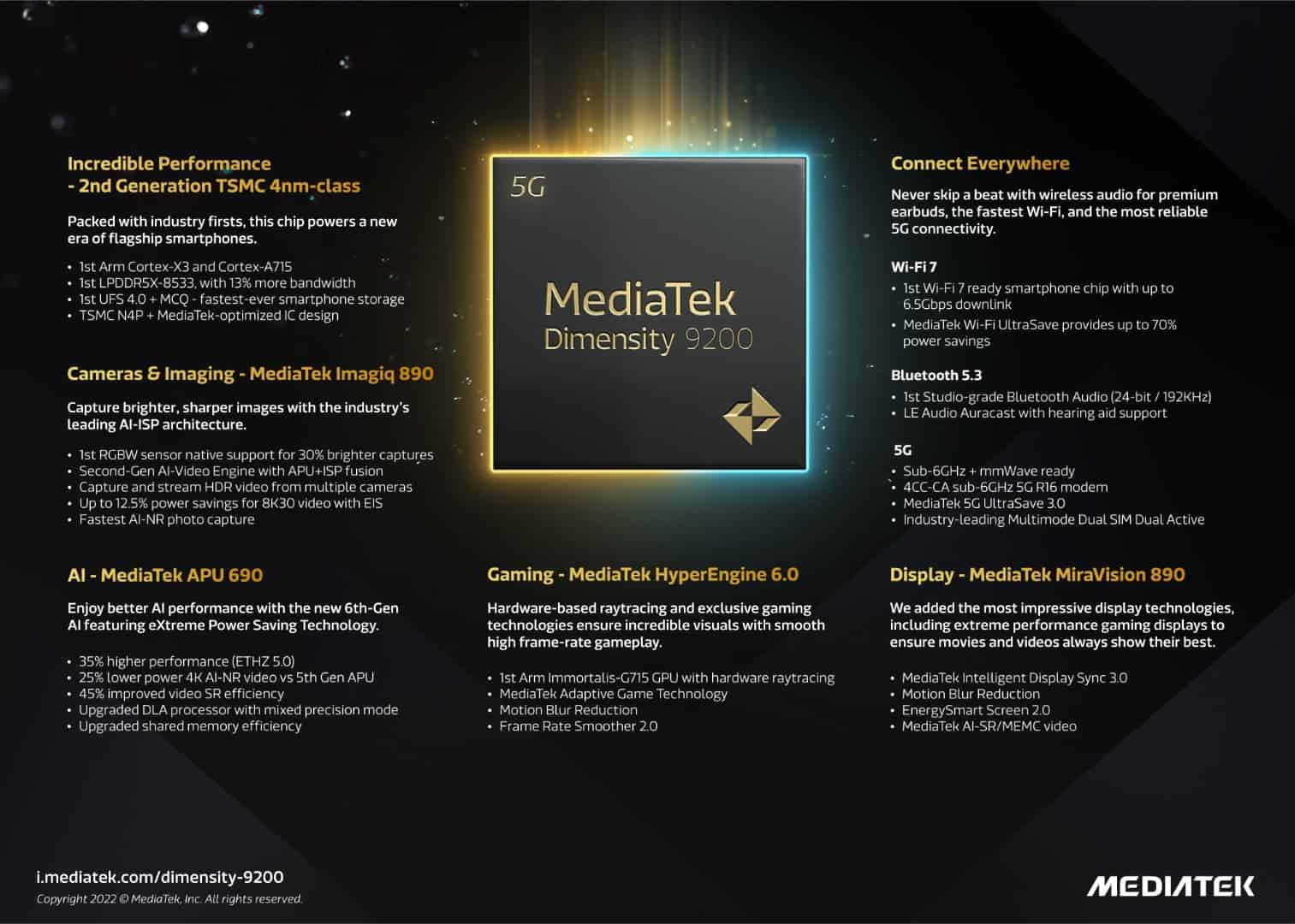 For a while, MediaTek competed in the race for top-tier processors only for show. First, the manufacturer unveiled the Dimensity 9000 chip, which was intended to compete with the Qualcomm Snapdragon 8 series but was unable to do so. Shortly after, the company unveiled the Dimensity 9000 Plus to contend with Snapdragon 8 Plus Gen 1. Users who keep up with the most recent smartphone releases are aware that Qualcomm easily made the podium. However, on November 8, MediaTek formally unveiled the latest generation Dimensity 9200 CPU, which stands a decent chance of capturing a significant portion of the market for flagship smartphones.

The Dimensity 9200 chip has eight computing cores, is constructed using TSMC’s 4nm process technology, and fully uses all ARM technologies (one Cortex-X3 at 3.05 GHz, three Cortex-A715 at 2.85 GHz and four Cortex- A510 at 1.8 GHz). Notably, MediaTek has confirmed rumors from the inside that the new chip no longer supports 32-bit apps. Old software, some games, and specialized apps will now be a thing of the past because the processor only now functions with 64-bit programs. However, Google’s Tensor G2 also only supports 64-bit software, making this not the first chip to give up 32-bit apps.

It’s difficult to call the Dimensity 9200 a performance breakthrough, of course; while it performs 12% better than the Dimensity 9000 in the single-core GeekBench 5 test, the improvement in multi-core performance is only 10%. On the other hand, mobile CPU performance has long since peaked, and other metrics are now competing for market share. For instance, MediaTek claimed that a next generation processor uses 25% less energy while providing the same performance as the Dimensity 9000. This ought to considerably lengthen the smartphone’s battery life. The firm also asserts that the new chip dissipates heat 10% more effectively, which should solve the issue of devices overheating under heavy loads.

The graphics subsystem of the processor has undergone significant improvements; it now uses the ARM Mali-G715 Immortalis MC11 GPU, which performs 32% quicker in the Manhattan 3.0 benchmark than the previous generation of chips. Although the new graphics accelerator should use 41% less power while performing at a similar level to its predecessor, this is not the most crucial factor. The fact that MediaTek now supports hardware-accelerated ray tracing is significant since it should significantly enhance reflections and shadows in games that use this technology. Ray tracing on smartphones is a step toward console graphics, albeit there are probably not that many of them.

The system-on-chip also has its own Imagiq 890 image signal processor. Based on artificial intelligence, this processor should assist the camera in determining the exact foreground and background of a picture in order to adjust saturation, colors, and other aspects of the image. The chip also supports Bluetooth 5.3, has a 240Hz refresh rate for Full HD+ resolution displays and a 144Hz refresh rate for WQHD displays, runs LPDDR5X memory at up to 8533MB/s, supports UFS 4.0 storage, and is Wi-Fi 7 compatible. 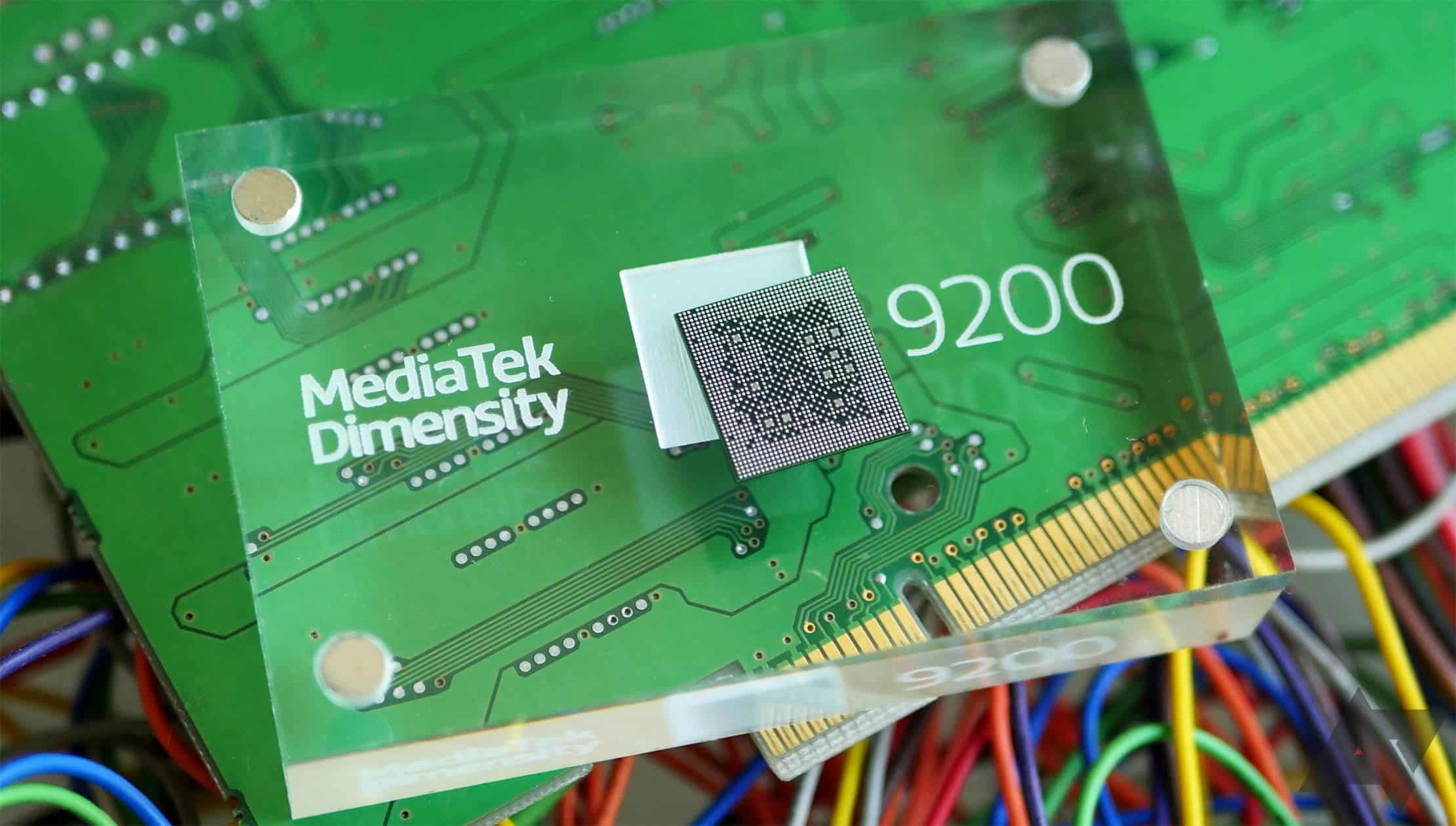 AnTuTu has been used by MediaTek to benchmark its new Dimensity 9200 in order to get a sense of how things will be in 2023. The chip has a score of around 1,260,000 points. To give you an idea, today’s high-end smartphones are unable to reach a million points.

It’s probable that by 2023, a lot of manufacturers will be interested in this chip, which is wonderful news. You shouldn’t be concerned if the smartphone you intend to purchase has the Dimensity 9200 processor rather than the Qualcomm Snapdragon 8 Gen 2. Both chips will provide a very high-end experience.

Previous Honor Magic 5 series: Everything you need to know

Next Realme 10 5G: specs, price and images leaked before the launch

MediaTek Will Announce Dimensity 9200 On November 8