Discord was once primarily aimed at gamers. However, at the moment, it’s a kind of messenger for everyone. This has led to its server inflation, which annoys many Discord users. Now the UK government has also started a server – and it happened as it had to. Discord servers are popular and useful too, at least in many use cases. But that also means that institutions and companies come up with the idea of ​​opening a “representation” on the platform, which actually has no place there. This is now shown by the example of the British government. Because the UK Department of Finance and Economy, i.e. His Majesty’s Treasury, had the glorious idea of ​​starting a Discord server. 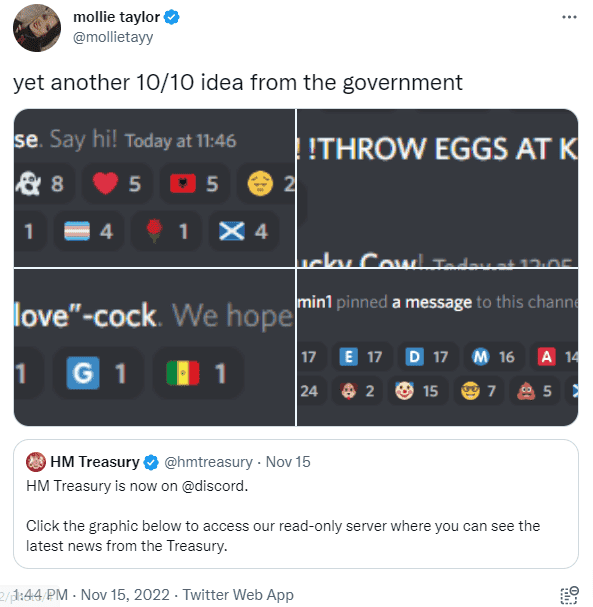 There is not too much information there, the HM Treasury server is also only “Read only”. This means that you cannot post anything there. The server also only has three channels, a welcome channel, one for “how to use this server” and one for ministry news. So the server is currently anything but informative. There are a lot of questions about the existence of this server. What is the British Ministry doing there and why do you even need a Discord server?

Still, users stormed the server in a “creative” way of letting the UK government know what they think of them. And as expected, that’s not a lot. However, since the users cannot post anything themselves, they resorted to tricks to send their messages.

On the one hand, that was a changed name and a note with a corresponding message. On the other hand, users got creative with emoji reactions. They also used letters, among other things, to leave more or less clear messages. As PC Gamer reports, the welcome channel and the possibility of emoji reactions have disappeared in the meantime. But both are now back – and the rarely adult “fun” continues.

Twitter Users Moving To Other Platforms After Elon Musk Takes Over