This year Samsung introduced the Galaxy A04 and Galaxy A04e. As you may know, these are the lowest offerings in the Samsung Galaxy A-series, but what about the M-series? Well, 2022 will not end without a Samsung Galaxy M04. The company is doing preparations to launch this super-budget smartphone. Today, it has been spotted at the Google Play Console with the MediaTek Helio G35 chipset. It’s an old chipset, but that is what often serves the low-end segment.

The Samsung Galaxy M04 has a fingerprint scanner on the side, right below the volume rocker. These are good news for the low-end segment. The recently-released Vivo Y02, for instance, misses a fingerprint scanner. So it’s good to see Samsung keeping this seamless biometric authentication method on the budget phone. As usual in this segment, the design brings back the waterdrop notch and has fairly thick bezels all around. It also has a 3.5 mm audio jack and a USB Type-C port. 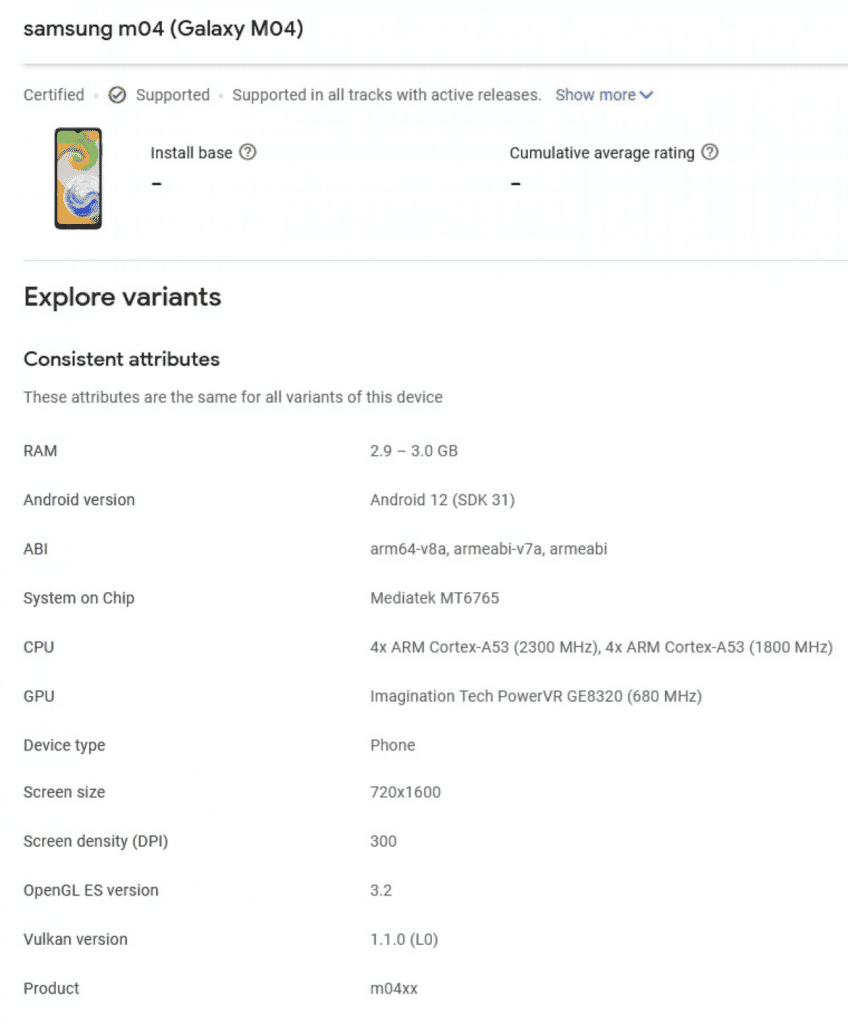 The listing confirms a screen with HD+ resolution for the Samsung Galaxy M04. Of course, this is an LCD, hopefully, it will bring at least a 90 Hz refresh rate. But we can’t ask much in this segment, even in 2022. The upcoming Galaxy A14 5G also boasts an HD+ resolution and has the same display design. The Galaxy M04 may be slightly inferior in terms of hardware.

Under the hood, the Samsung Galaxy M04 brings the MediaTek Helio G35. That’s an old chipset with 12nm manufacturing and eight ARM Cortex-A53 split in two clusters. It’s okay for basic tasks, but don’t expect great performance in games out of the casual segment. Anyway, we expect it to bring a 5,000 mAh battery to keep the lights on. The Samsung Galaxy M04 has 3 GB of RAM in this variant and runs with Android 12.

The Samsung Galaxy M04 already appeared on Geekbench and Bluetooth SIG. We expect it to launch anytime soon. In my humble opinion, the device is far from what we currently have in the mid-range segment. Anyway, if it comes at an appealing price it will certainly find its circle of customers. Samsung sells a lot of these devices in emerging markets, and we expect this one to be another hit for the low-end category.