It’s been a while since Blackview BV5200 was hot. And now Blackview, an industry-leading manufacturer of rugged mobile phones, launches their new rockstar Blackview BV5200 Pro. Inheriting the advantages of BV5200, Blackview BV5200 pro features some significant upgrades. With a larger ROM from 32GB to 64GB, more advanced processor from quad-core to octa-core and an upgraded ArcSoft camera system. 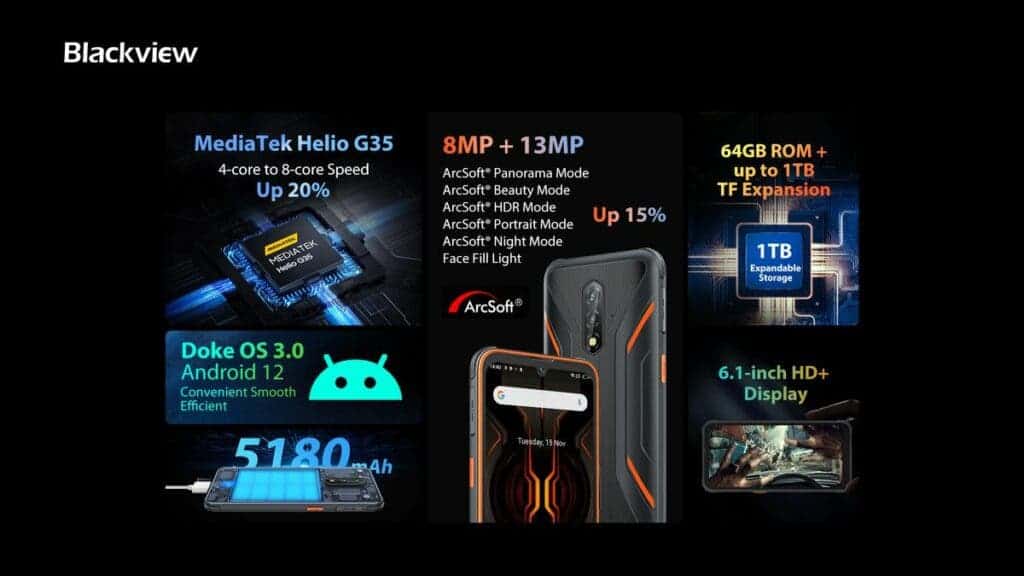 Blackview has made great efforts to relieve users’ storage anxiety and improve the performance of mobile phones. Different from Blackview BV5200, BV5200 Pro expands the ROM from 32GB to 64GB for 100% more memory for HD videos, wonderful photos and music in high-quality right on your phone. Aside from RAM and ROM, there is also up to 1TB expandable storage. 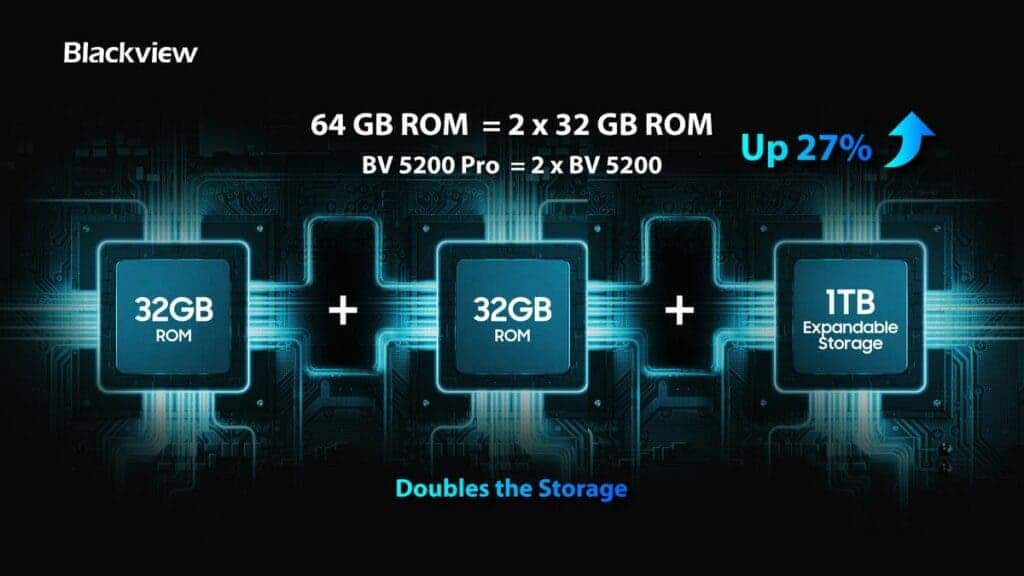 As for better operating performance, Blackview replaced the processor with a more advanced one. Compared to the BV5200’s quad-core MediaTek Helio A22, Blackview BV5200 Pro features an octa-core Mediatek Helio G35 processor. Assisted by 4GB of RAM for a 20% speedup, delivering a powerful boost to work and play performance. 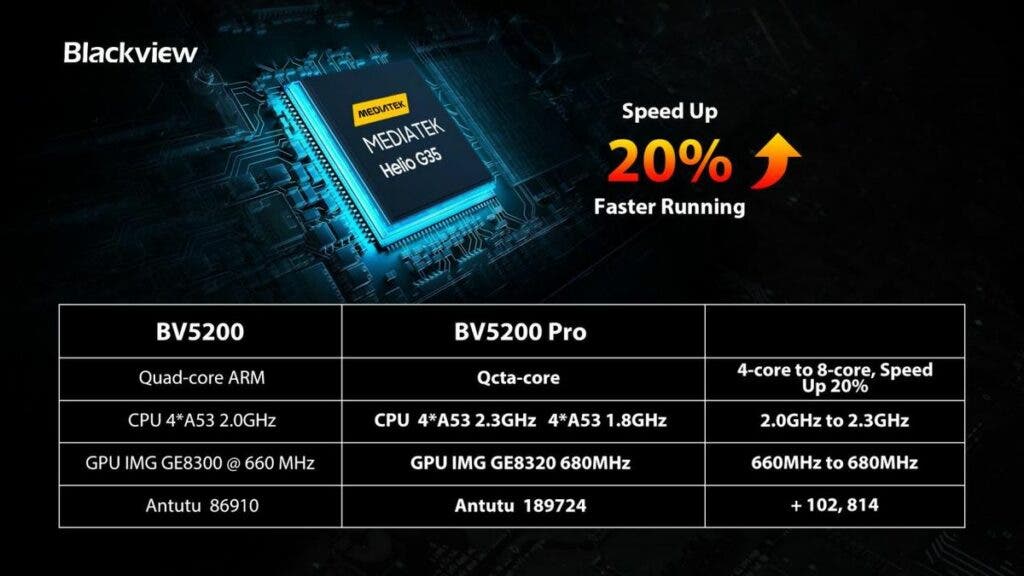 Improved Camera System with ArcSoft by 15%, A Leading Provider of Algorithms for Camera

In order to bring better photos to users, Blackview has never stopped exploring the pursuit of perfection in photography. With the latest camera algorithms from ArcSoft, a leading provider of algorithms and software solutions, Blackview BV5200 Pro helps users get the most out of their photography and shoot more like a pro. 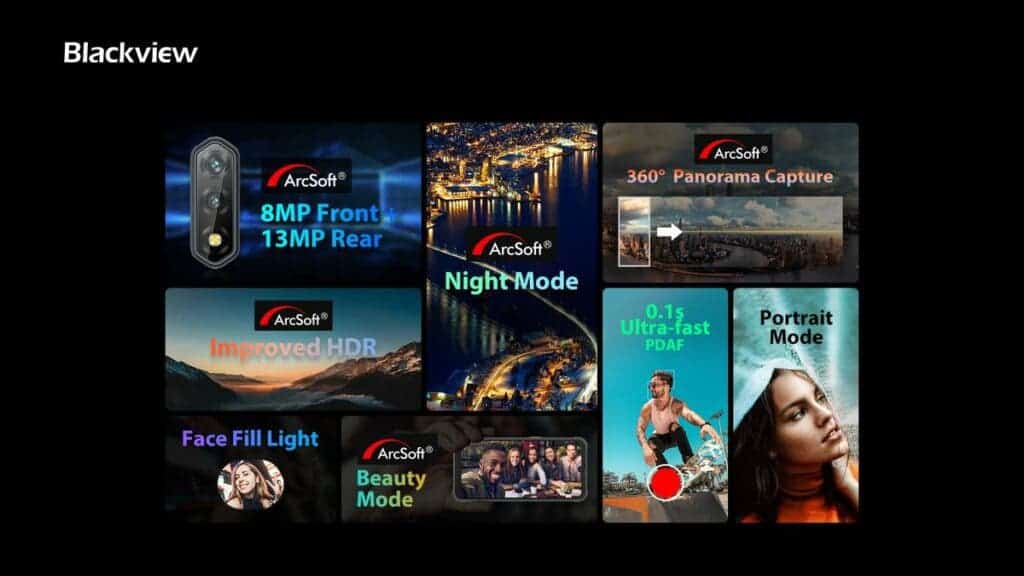 Blackview BV5200 Pro intelligently copes with the distortion of shots and restores the fidelity of images. So you can capture clearer and better images of buildings landscapes with the handset. With a progress of 15% on BV 5200, BV 5200 Pro greatly reduces the deformation of the photograph. And allows you to take larger, clearer, and more beautiful landscape photos at higher quality.

When taking a selfie, Blackview BV5200 Pro gives a good representation of your skin tone, removes blemishes from your face, and preserves your main features. With the updated ArcSoft algorithm, the naturalness and authenticity of photos taken with BV5200 Pro is 15% higher than BV5200 in Beauty Mode.

Blackview BV5200 Pro smartly improves the brightness in dark areas, while it also restores more vivid detail in bright areas. Bringing out the best in your picture when shooting in well-lit or dark locations. BV5200 Pro achieves more 17% details than the BV5200 to get the perfect balance between bright and dark areas in a photo. Delivering the nicest shots you want.​

Blackview BV5200 Pro will always keep you in the center of the photo and blur the background to get the best-looking picture of the person. Big 16% increase on the base BV 5200, BV5200 Pro with the updated ArcSoft Portrait technology intelligently blurs more background. And preserves more scene details, making the central figure more prominent.

BV5200 pro gives a near-realistic shot of night scenes with luminous objects and bright buildings in the distance clearly visible in the photo. While BV5200 takes crisp and bright images at night, Blackview BV5200 Pro takes even brighter and more stunning images with more detail in low light.​

Blackview BV5200 Pro is engineered with a superior level of rugged durability to survive everyday drops and bumps. Meanwhile, it’s 13.65mm slim and 268g light to make each grip comfortable. Speaking of the screen, owning a large 6.1″ display of 720*1560 HD+ resolution, BV5200 Pro delivers a broader and stunning vision with rich colors and brilliant contrast.

Talking about power, equipped with a large 5180mAh battery, BV5200 Pro supports 7.5 hours of gaming, 14.1 hours of web browsing and 20 hours of music time. As with Blackview BV5200, we must mention BV520 Pro’s powerful camera features.​

Blackview has always been committed to applying a better operating system to its products to bring a better user experience. Based on Android 12, Doke OS 3.0 empowers BV5200 Pro with breakthrough UI performance for greater efficiency and smoother interactions. 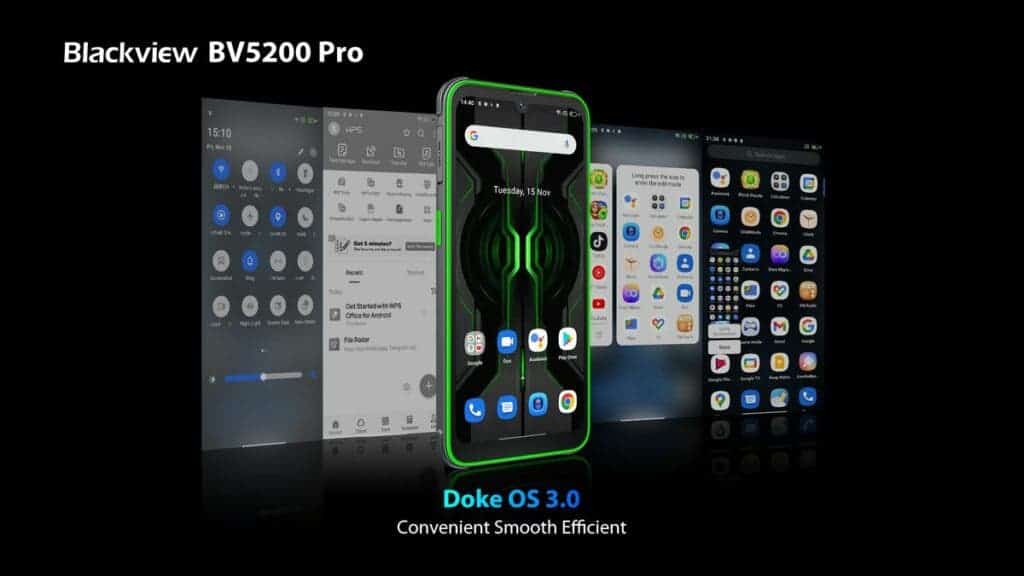