Are you in the market for a Monster flashlight? One that makes you smile with all your teeth, that has a WOW factor when you turn it on at turbo mode. And even shuts down your partner’s complaints about all the money you are spending in flashlights?

Such lights were once characterized only by their higher power. But nowadays, especially some brands, “monster” flashlights are packed with more feature than just an incredible output. Impressive runtimes, new building and manufacturing techniques, unique UI, integrated or rechargeable batterie. All these are just some of the features, that these lights are going to bring to your collection.

Among the most important and latest releases, we have 2 Olight flashlights, The Marauder Mini and the Marauder 2. Which one is the best ? Which one should you pick ? Or should you buy both ? Let’s start with a small description of both lights. And then see how they compare to each other.

So what are the differences ?

The Marauder Mini is the smallest light in the Marauder series. And brings you the best of both worlds when it comes to flood and throw: 7000 lumens of max output, and 600 meters of throw- As well as a bright series of RGB LEDs, that will give you a very uniform beam. The Marauder Mini features a powerful and replaceable lithium ion battery pack with a 32650 battery inside. As said before, a lot of light is not all you should expect when purchasing this flashlight. So the Marauder Mini comes with a built in thermal sensor to regulate the output, an interface with a clever and intuitive rotating knob, a switch to activate throw or flood mode, a battery meter, an output meter, and output indication via vibration. The provided battery is rechargeable easily and readily with Olight magnetic cable. 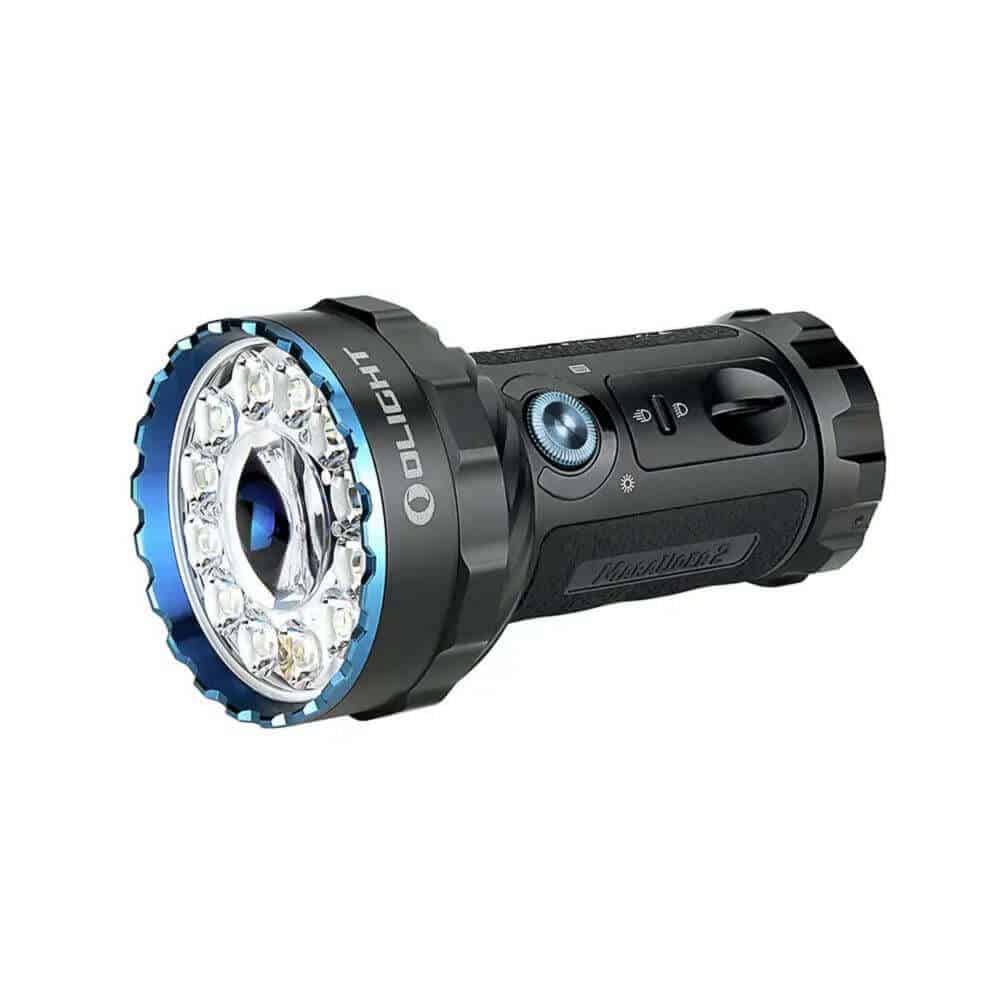 On the other hand, the Marauder 2 has 14000 max output with a max distance of illumination of 800 meters. The Marauder 2 features a powerful and replaceable lithium ion battery pack with a 32650 battery inside. As said before, a lot of light is not all you should expect when purchasing this flashlight, so the Marauder 2, as well as the Olight Marauder Mini, comes with a built in thermal sensor to regulate the output, an interface with a clever and intuitive rotating knob, a switch to activate throw or flood mode, a battery meter, an output meter. The provided battery is rechargeable easily and readily with a universal USB C Cable.

The main difference between these 2 lights is the size and weight. The Olight Marauder Mini, as the name implies, is the smaller flashlight of the 2, measuring 130 mm in length, with a head diameter of 66 mm, body diameter of 44mm, weighting in at 462 grams with the provided battery.

What about the Marauder  ? Do you need 4 hands to carry and operate it?  No, not at all. It might not be as compact as the Marauder Mini, but is still of a very manageable size. Measuring 140 mm in length, with a head diameter of 79 mm and a body diameter of 53 mm. And weighting in at 750 grams.

There is no wrong choice

Before comparing them, let’s state the obvious. These are both great lights, made by Olight, so the fit and finishes are as great as you can get, they are both made out of durable anodized aluminum. Comparing the two, the Marauder 2 is 10 mm longer, 13 mm wider at the head, 9 mm wider at the body, and 288 grams heavier. To give you a better perspective, let’s turn these numbers in percentage. 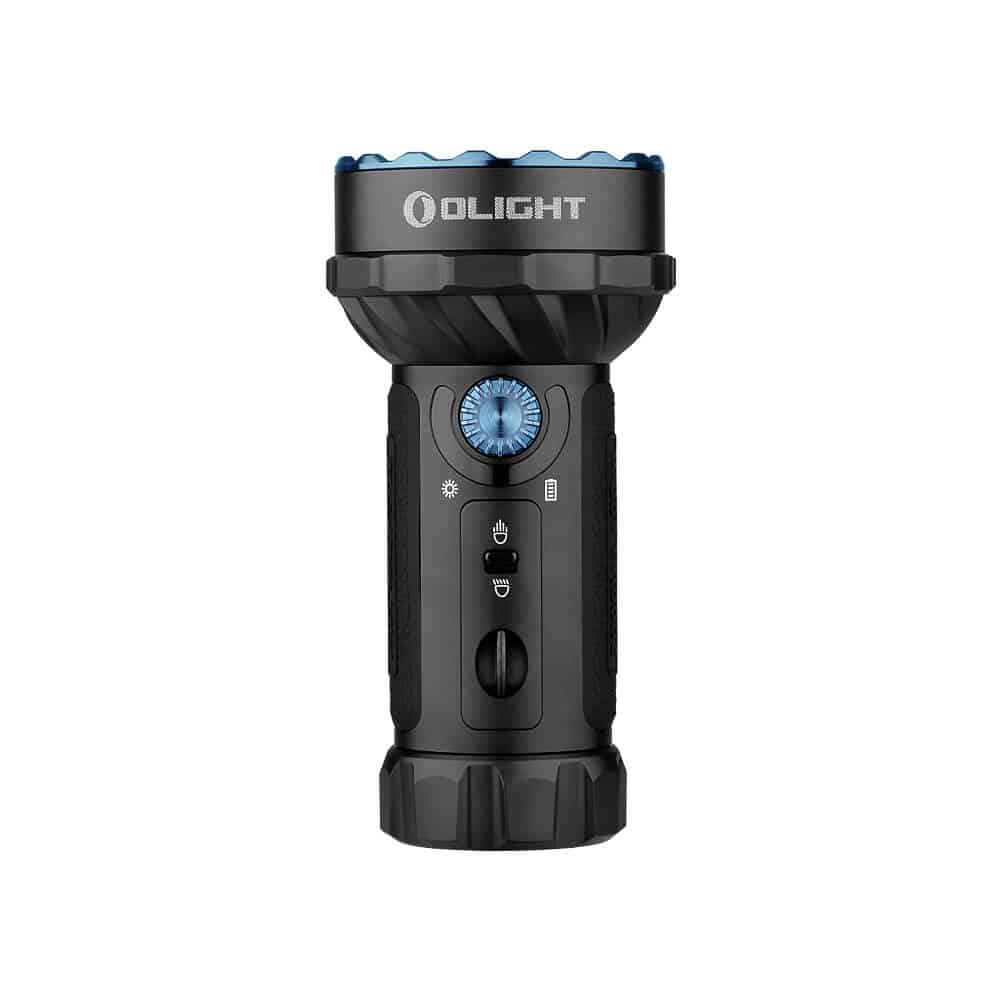 The Marauder 2 is 8% longer (so, not longer by that much), 17% wider at the head and at the body (ok, 17% is a bit more), and finally, 61% heavier (ok, this is very noticeable). On the other hand, the Marauder 2 has double the brightness of the Marauder Mini, and 200 meters (or 50%) more throw. But the Marauder Mini has a RGB LEDs, as well as vibration indicator for when you reach minimum and maximum outputs.

On the other aspects, both lights are almost identical. The interface is the same of both lights. With a super easy and effective rotary knob, battery and output indicator, switch to flip between flood and throw beam, silicone wrapped around the body to make the lights carry more comfortably in the cold, the heat, and avoid slipping when the light is wet or you are wearing gloves.

Both come with a charging cable, a battery and a lanyard. But only the Olight Marauder Mini comes with a sheath and only the Marauder 2 with a quick charging power adapter. They come in a number of colors for the anodization as well. The Mini comes in black, midnight blue and orange, while the Marauder 2 comes in black, orange, OD green, Desert Camouflage, Gunmetal gray, blue, desert tan, antique bronze and a metallic blue. So, if color is an important factor in purchasing your next monster light, then Marauder 2 offers way more color options.

So, who’s the winner? It’s you, obviously. Both the Olight Marauder 2 and the Marauder mini are great lights, rugged, reliable and powerful. The one you will choose will depend on your requirements. If lightness and compactness are a priority, you will happily choose the Marauder Mini. And also have to play around with the RGB mode. If your priority is the output and or the throw aspect, the Marauder 2 is the better choice. If you plan to use the light a lot, the Marauder 2 can also be charged more quickly, and with a universal USB-C cable (and will also work as a powerbank). Olight Marauder 2 or Marauder Mini? The choice is yours!

Next iOS 16.2 update on iPhone arrives just before the holidays

The Inner Core of the Earth has Stopped Rotating, What are the Consequences on Human Lives?