Apple has revealed that the Satellite Emergency SOS feature will be made available in additional countries, as was to be expected. The new feature of the iPhone 14 series is now accessible in Germany, France, Ireland, and the United Kingdom in addition to its initial availability in the United States and Canada.

As previously mentioned, Satellite Emergency SOS enables iPhone 14 owners to send brief emergency texts in areas without Wi-Fi or cellular connectivity. It’s important to note that you should install iOS 16.1 or later for the feature to work.

Using satellite connectivity, you may also share your current location in the Find My app. The technology also integrates with other security features like Crash Detection and Fall Detection found on iPhone and Apple Watch.

After an iPhone 14 or an iPhone 14 Plus, 14 Pro, or 14 Pro Max is activated, Satellite Emergency SOS is free for two years. Apple has not yet said what the pricing formula will be beyond the free two-year trial period.

Apple claims that next year, support for the feature will be extended to even more nations. So how does this new feature work? and will it be able to save lives? Let’s discuss that in this article.

The arrival of iPhone 14 satellite emergency SOS in new countries 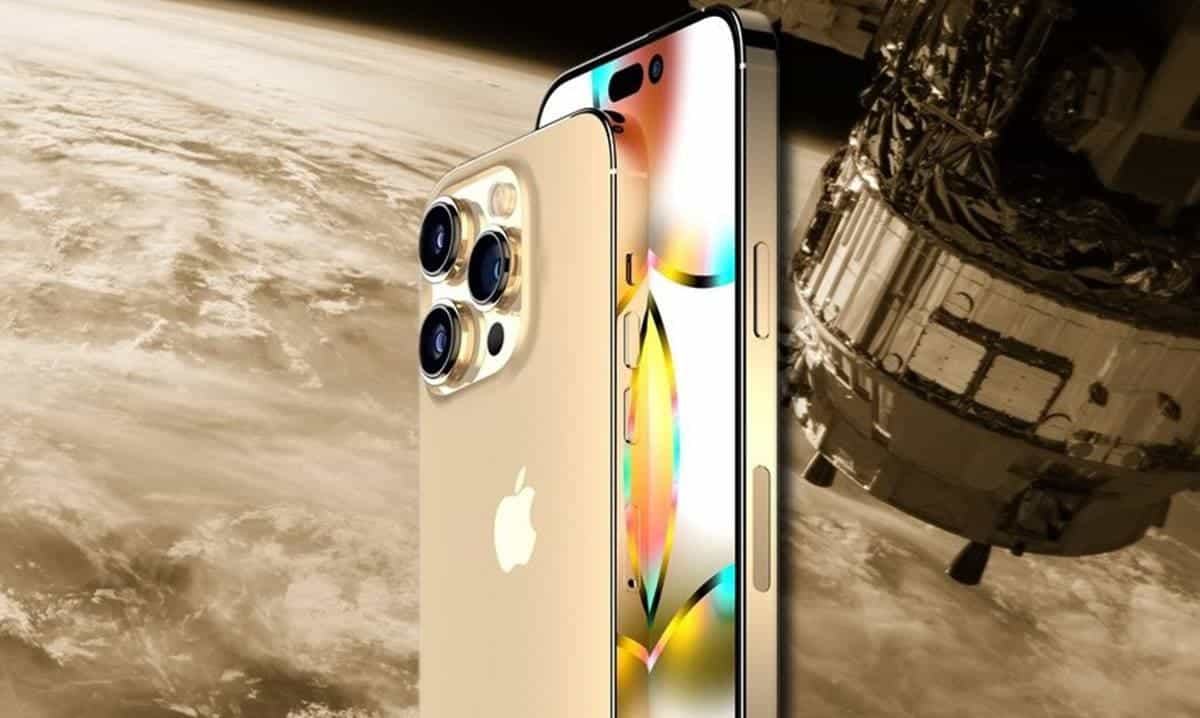 The good news is that Apple is introducing this feature in several new countries today, December 13, 2022, as promised. This rollout concern European nations and include France, Germany, the United Kingdom and Ireland.

Users of these countries will have the chance to test this feature and to gradually learn about the ergonomic work done by the Apple teams to make the experience as simple and seamless as possible. Because, as is frequently the case, a lot of technology and artificial intelligence lies hidden underneath the interface’s outward appearance of simplicity. The Apple teams took a long time to finish this project. You must know that they have only created a new protocol for communicating with satellites on their iPhones. Not to mention the issue of establishing a partnership with the satellite operator and inserting the chip required for the connection into the smartphone.

Remember that if your operator’s cellular network does not cover the area where you are, you can usually contact for help using another network. However, it can also happen that you are in a place that is so distant. And that there is no network at all. Exactly in this situation does Satellite Emergency SOS come in. There are two methods for getting to it. The “universal” emergency number 112, which has been in use across Europe since 2000, can be used to start a conversation in Messages, however, making a call is the most logical action. In this regard, it should be noted that these European countries will be granted access to an extra feature that will be unveiled in a few weeks along with the iOS 16.2 update. It will make it easy to contact the emergency services by dialing the traditional local emergency numbers.

In either case, an attempt will take place by the iPhone to get in touch with the emergency number through the network of the various cell providers. When it determines that it has no network connectivity, it will display “No connection” at the top of the screen. Directly beneath the entered number. Try sending a satellite-delivered emergency message. Therefore, a button with the logo of the Messages program and tapped with an SOS bubble will offer you to switch to an “Emergency message by satellite” at the bottom of the call interface. Because audio calls are not permitted with emergency SOS via satellite.

Everything is done via written letters to save time and reduce bandwidth usage. Of course, you can dictate voice messages. The letters SOS and a little icon resembling a satellite at the very top of the screen, above the bars that typically indicate the strength of mobile reception, will appear.

The UI prompts you to report an emergency after you turn on the Emergency SOS switch. Apple has created a form with the aid of rescue professionals. In order to prevent having to enter a lot of information. It could impede communication and its interpretation. As a result, you have to identify the issue by selecting whether it is a car accident, an illness or injury, a crime, a fire, etc. The following questions are then directed at you: Are you the victim? Do you have respiratory issues? What word best sums up urgency? a serious injury? An attack? Etc.

Your iPhone 14 will take around a minute to deliver your answers, your medical file, and your GPS coordinates after the form is finished. At this point, there are a number of things to say.

The iPhone retains the answer number rather than sending the data itself. The phone compress the data three times as much before the transfer.

The significance of completing the iOS-integrated medical form must therefore be emphasized. This summary has previously been beneficial in the event that you were in an accident or passed out in public and the emergency services were aware of its presence because it is available even when your iPhone is locked. The medical form will now be applied consistently and has a greater potential to determine life or death. If you have filled it out, it comprises your height, weight, blood type, and any medical history for the record.

In fact, Apple had to set up relays in every European country where the service is official. We are unsure of the number or locations of these relays. We only know that they are able to support a rise in the number of calls, depending on the season (skiing, for example, is conducive to this type of call from distant regions) or a potential natural disaster. Additionally, Apple employs skilled staff who will first receive your emergency messages before dispatching assistance. In order to inform the emergency services that a system would be calling them on behalf of persons in danger, it also had to undertake an educational effort with them.

A user-friendly UI with step-by-step directions 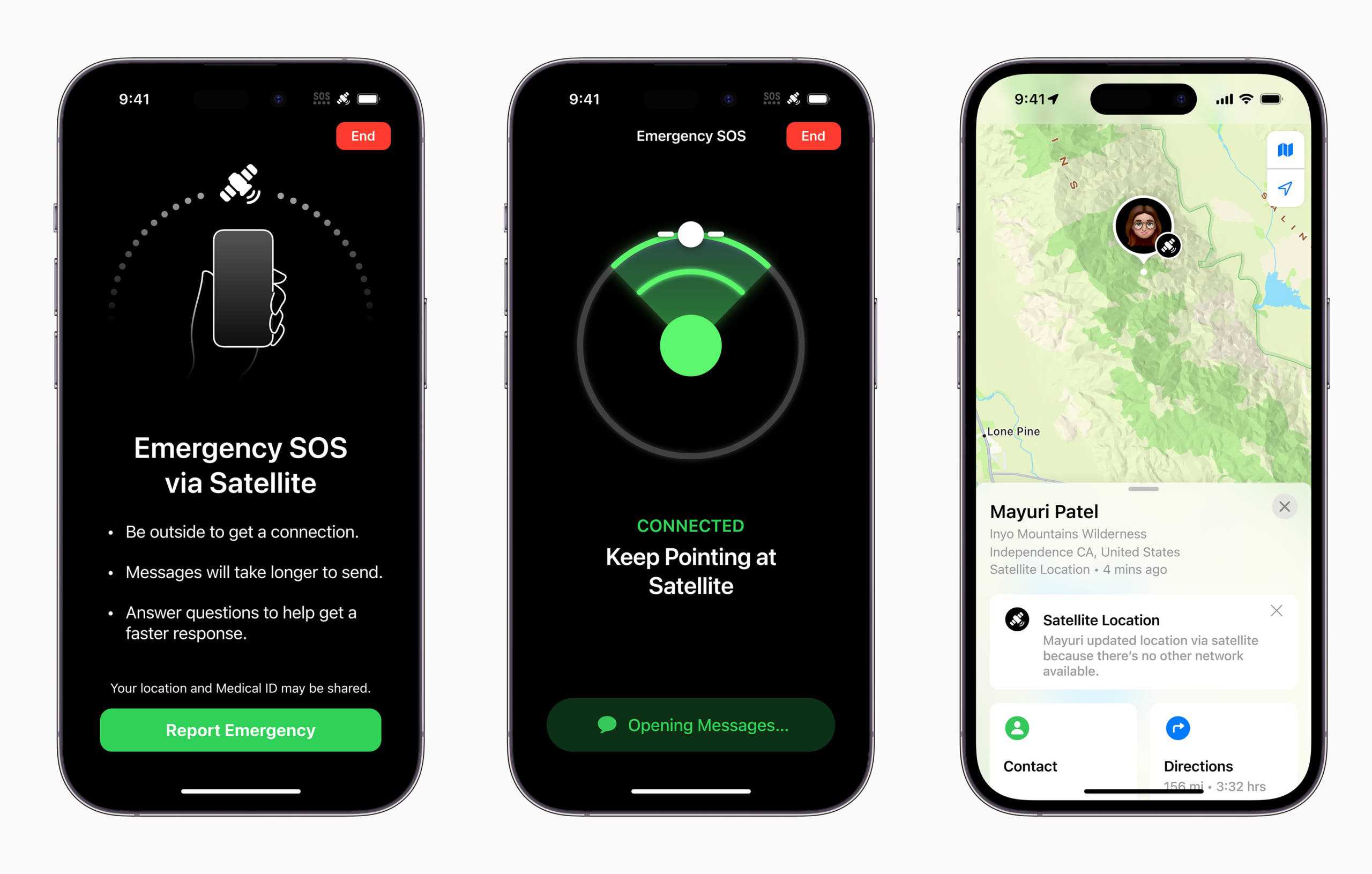 24 Globalstar satellites that orbit at an altitude of roughly 1,400 km. And move at a speed of 24,000 km/h are the foundation of Apple’s service. Apple has contributed at least 450 million dollars to this collaboration and even helped launch a satellite last summer. You won’t ever have to wait too long to be get a coverage with such a large network of satellites.

A message will advise you to wait for a few minutes if you are outside the immediate coverage area and provide a time estimate.

Additionally, once you have a connection, you might need to monitor the satellite’s movement a little bit. By keeping your iPhone pointed in the appropriate direction because it moves quickly. A haptic feedback system also alerts you if you start to lose signal. As you might not always be staring at your screen. This could be the result of the satellite passing behind a mountain range or thick vegetation.

The Satellite Emergency SOS interface will advise you to “attempt to find a location with clear sky” in these situations, for example. Gaining as much distance from the wall as you can. While minimizing your risk is a smart idea in the mountains. Since, as the interface states, “the relief of the landscape, buildings, and trees can obstruct the connection” with the satellite.

Your iPhone will first look for you. After that, it will attempt to connect to a satellite. The simple user interface walks you through each process and notifies you when a satellite will be accessible. You will need to turn to the left or right by a message and a brief animation. So that the iPhone’s antennae can establish contact with a satellite.

How does an iPhone know when a satellite is nearby or is about to pass by? Simply put, because a new list of the satellite positions is getting to it on a regular basis during normal periods. So that the iPhone may still rely on relatively recent data when it becomes offline. Due to the loss of a cellular network.

Rescue for the general public and for daily life

It may be vital to clarify that, even if this new service can save many lives as in plans. It will never be able to take the place of emergency beacons for the high seas, for instance. The only situations where “traditional” rescue would step in are where Apple’s function is usable. Therefore, if you want to get a rescue at sea, stay no further than 20 nautical miles from the shore. Similarly, it is to be feared that SOS urgency won’t be of any benefit to you if by chance of navigation you find yourself in another country’s territorial waters, where the service is not launched yet.