Android is the dominant mobile operating system for some reasons, but the most obvious one is the number of devices running it. While iOS is limited to Apple devices, Android is basically running in everything else in the mobile segment. Although rare, we still have alternative OS like Sailfish but the market share of these OS is microscopic. Despite the dominance, Android seems to be experiencing a slowdown at the end of 2022. Meanwhile, iOS is booming.

iOS is trending thanks to iPhone 14 Pro series

According to a report by Statista, the iOS market share is rising in the final quarter of 2022. Much of this is due to the succesful launch of the iPhone 14 Pro Max which is the dominant device in the lineup. Meanwhile, Apple’s idea of launching vanilla models with different specs is ending up as a fiasco. They are less interesting for customers, and at the same time, the constraints in the supply chain are worsening the situation. Anyway, iOS is still getting some attention at the end of the year. Android, on the other hand, is losing ground. That despite the stability of the smartphone market at the end of the year. 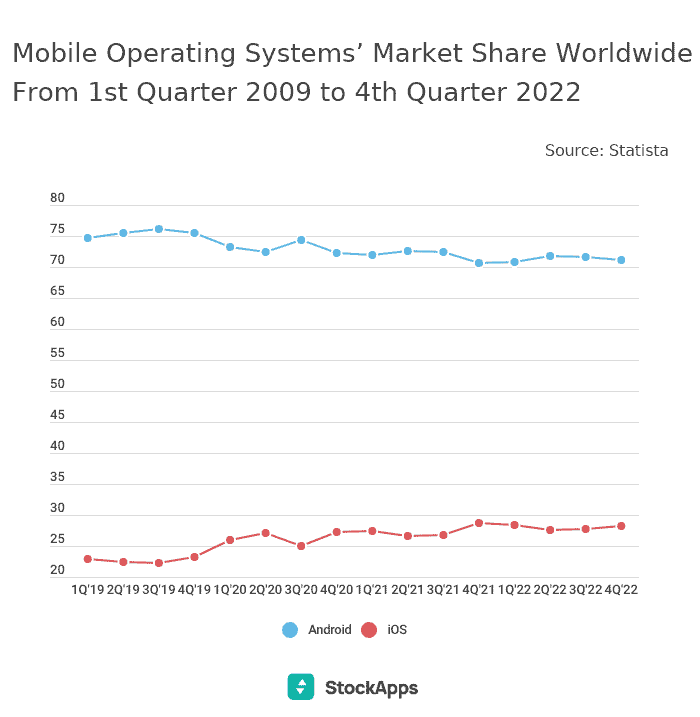 As we’ve said, iOS is still miles away from touching Android’s dominance. Honestly, we don’t think that will happen as long as it keeps being closed to Apple devices. iOS market share still sits below the 30% mark while Android goes above 70%. If you look with attention, you will find some competitors here and there. But again, the real fight is still only between Android and iOS. Microsoft tried to make a third option with Windows Phone but failed. Now, Huawei tries to find its way with HarmonyOS, although it is still based on Android.

Read Also:  iPhone 15 Ultra With the New LG Camera Is a Major Threat to Samsung

As per the report, the iPhone 14 Pro and Pro Max are pushing users into the iOS world. The new phones brought the first significant change in years. They have Always-On Display, and also the Dynamic Island which revitalizes the notch and gives a new meaning to Punch-Hole cutouts. There are more changes coming, and as per recent reports, iOS 17 may give users the ability to sideload apps. We are curious to see how things will advance in 2023.

In related news, Apple is rolling out iOS 16.2 and iPadOS 16.2 with new features and fixes.

Previous iOS 16.2 and iPadOS 16.2 arrive to unleash the singer in you