Xiaomi is gearing up to introduce the Redmi Note 12 5G in India pretty soon. To those unaware, the Redmi Note 12 series reached China in late October and now is making its way to India. The brand prepares to launch the Note 12 5G, 12 Pro, and 12 Pro+. Ahead of the January 5 launch, we are getting leaks and reports about the phones’ configuration. One of the main questions about these phones is whether they will come with the same specs as the Chinese variants, or will have different specs. As far as the Redmi Note 12 5G is concerned, it is bringing the same CPU. 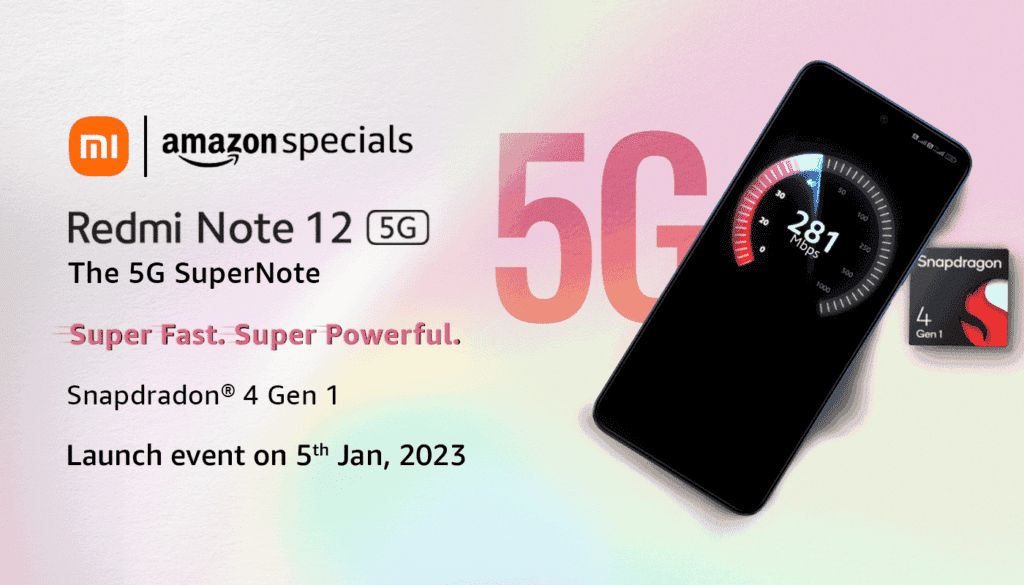 Xiaomi confirmed through the Amazon micro-site the presence of the Snapdragon 4 Gen 1 in the vanilla Redmi Note 12 5G. This chipset is yet to become popular, however, it marks the transition of the Snapdragon 400 series into the new naming form. Moreover, it uses a 6 nm manufacturing and brings 2 x ARM Cortex-A78 cores at up to 2.0 GHz. The remaining power-efficiency cores are of the Cortex-A55 kind. The CPU will deliver decent performance for social media apps and moderate gaming.

The Amazon micro-site also confirmed other specs of the phone. The phone will bring an AMOLED screen with a punch-hole. However, the company didn’t give technical specs on this panel. Considering the Chinese version, we can expect a 6.67-inch AMOLED screen with a 120 Hz refresh rate and Full HD+ resolution. As for the camera, it seems that the Indian version will bring improvements over its counterpart.

The Redmi Note 12 5G version for India will bring a triple-rear camera setup with an LED flash. It has one more camera than the Chinese version. The main camera is the same 48 MP shooter, and the 2 MP depth sensor may be present as well. We are curious about the purpose of the third shooter. Hopefully, we’re seeing an ultrawide shooter. However, this can still be just a macro sensor just for the sake of numbers.

Other specs should be identical to the Chinese Redmi Note 12 5G. These include a side-mounted fingerprint scanner, and a 5,000 mAh battery with 33W charging.