OnePlus launched the OnePlus 11 in China as its first flagship for 2023. In fact, it may be the highest offering as the company ditched the Pro series. That said, the OnePlus 11 is the OnePlus 10 Pro successor with specs that make it a decent upgrade. While the Pro moniker is gone, the company will still introduce a new R variant. The OnePlus 11 will launch in India on February 7, and apparently, the OnePlus 11R will launch shortly after. Ahead of the launch, evidence of the phone emerged straight from the brand’s website.

OnePlus started a cost-effective flagship series with the OnePlus 9R, and last year brought the OnePlus 10R. Now, it is set to introduce the OnePlus 11R, and as usual, it should be exclusive to the Indian market. The same phone is also expected for the Chinese market as OnePlus Ace 2. Ahead of the launch, the phone’s identity was spotted by the folks at 91Mobiles and the tipster Mukul Sharma. 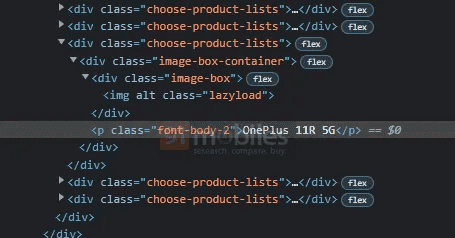 According to the report, the OnePlus 11R will reach India in April or May 2023. According to the tipster, the phone is already being tested in the country. That explains why it appeared in leaked shots a few weeks ago. Now, the phone’s moniker appeared on the company’s Indian website.

The OnePlus 11R packs a triple-camera setup with an arrangement that resembles the OnePlus 10 series. Some rumors point to a circular island, similar to the OnePlus 11. However, it’s hard to determine the exact design. The leaked shots have revealed the phone, but a case still hid the design. The phone will have a bezel-less panel with a centered punch-hole. That’s a notable difference over the OnePlus 11 which has a top-left cutout.

The OnePlus 11R will feature a 6.7-inch curved AMOLED screen with a 1.5K resolution. That’s a fancy description for the 2,772 x 1,240 pixels arrangement. The device will also bring an in-display fingerprint scanner with AI face unlock. The panel will also refresh at 120 Hz. Under the hood, the phone has a Snapdragon 8+ Gen 1 SoC with up to 16 GB LPDDR5 RAM and up to 512 GB of Storage. The lights will be kept by a 5,000 mAh battery with 100W fast-charging support.

In terms of optics, there will be a 50 MP Sony IMX590 camera or an IMX766 sensor. There will also be an 8 MP ultrawide and a 2 MP macro shooter. The selfie camera is a 16 MP shooter. The OnePlus 11R will run OxygenOS 13 straight out of the box. Interestingly, the device also marks the comeback of the alert slider for the series.

Next ASUS ZenFone 8 and 8 Flip get Android 13 update