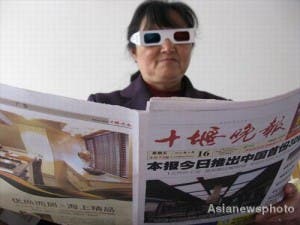 2010 will undoubtedly be the year of tablet computing and 3D media (3D iPad would be awesome). Around the globe, Nintendo have a 3D version of it’s popular Nintendo DS currently in development, Sony and others are making 3D HD camcorders, while nationally Chinese manufacturer TCL have 3D Televisions ready for launch and Hubei’s Shiyan Evening News local newspaper has been transformed from it’s regular black and white two dimensional print to funky 3D!

The 16 page newspaper came supplied with 1960’s style 3D glasses for 1 RMB (double that of a regular newspaper! So still damn cheap). Unfortunately the only pages to make use of the 3D trickery were a few advertisements plus a large endorsement for the suppliers of the 3D glasses.

Although this seems to have been a one off, it’s a very interesting idea one which other local newspapers are bound to follow.