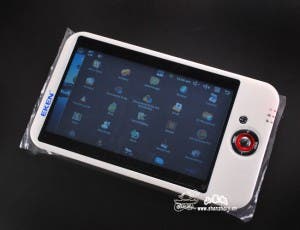 As good as the iPad may be it’s price is a little hard to swallow. Although cheap in the scale of all things Apple $500 isn’t cheap compared to what others have on offer. Sure the iPad has a better screen and a huge library of applications, but once you’ve bought your 16GB model that’s what you’re going to be stuck with unless you buy another one! Sure it’s got an awesome photo album application, but you need a ugly USB adaptor, computer or a data connection to get photos on it in the first place.
There’s also that possibility that you buy yourself an iPad only to find out it’s not really for you! Well before you hand over your hard earned cash on Apple’s latest, why not check out this $99 device from Chinese company Eken.

The plastic bodied device runs Google’s Android O.S version 1.5, which itself has a growing and rather impressive collection of third party apps. The Eken only has 128mb of ram and a rather sluggish processor, but if your wanting to just browse the Web, send emails, listen to music, watch a movie or just play the odd game it should prove to be adequate enough for most.
There is also the added benefit of an SD slot, meaning you can easily upgrade it’s external 2GB of memory quickly and easily share photos with friends directly from a camera’s memory card!


Don’t get us wrong this is no iPad beater, it’s not even in the same league, but what the Eken does (all the basic stuff the iPad can do) will be more than enough for most users who aren’t willing to spend too much, or those who have a netbook and just want a light ‘companion’ tablet to carry around too.

However! There is one catch! and unfortunately it’s a biggy (for us at least) and that’s it rather pathetic 2 hour battery life! 5 times less than the iPad’s (5 times cheaper too though) Let’s hope they address this in later generations!
What more tablet news? Subscribe here!