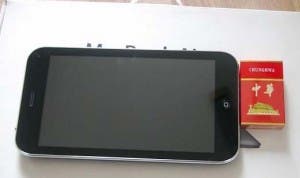 Ok, so we’ve reported on many a planned iPad clone and prototype on this blog, but where are they all? Well after a good few months of waiting the knock offs are slowly trickling on to the market.
This is one of the very first ‘clones’ that hit the web early last year, actually predating the iPad’s official launch which makes it more of a giant iPhone lookalike rather than an iPad clone.
The ePad, as it has come to be known has a 10.1 inch touch screen, motion sensors, GPS and 3G support plus a whole host of plugs and ports (USB, SD) that will make an ePad owner the envy of all the iPad owners who can’t find their dock connector accessories.
The ePad also runs Flash, thanks to it’s Windows 7 operating system, meaning Hulu and other flashed based sites play happily, and can even be hooked up to an external monitor through it’s built in VGA plug.
Other points worth considering are it’s monster storage ranging from 160 GB, 250 GB all the way up to the dizzying heights of 320GB!! That’s 5 times more memory than the top of the range iPad!

Join GizChina on Telegram
A 3000 Mah battery with unknown operation life powers a 1.66Ghz Atom CPU with 1-2 GB of RAM.
All of these specs should make for an iPad beater, unfortunately Windows 7 isn’t the greatest tablet O.S out there, but it could easily be swapped for Linux (or Snow Leopard) with a bit of hacking, plus it will multi task straight from the box.
There are a number of retailers on Taobao who have this (ePad) or similar device for sale pricing is around 2680RMB.