QingTing or Dragonfly as their name translates to in English, first caught out attentions when they released a rather fetching aluminum bodied laptop with laser cut Dragonfly logo on its lid. The Qingting Pro didn’t catch the eye as a well designed and sturdily constructed 13 inch Atom based laptop that costs as little as 3000 RMB ($450). No, it caught our eyes due to its likeness to Apple’s Macbook Pro line. 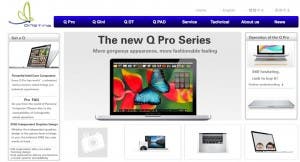 Side by side and at a short distance the QT Pro and the Macbook Pro look very much like distant cousins. Everything from the case design, keyboard layout and black bezel have been lifted straight from the Apple book of making sleek laptops. Even Qing Ting’s initials are suspiciously the same  to Apples famous Quick Time media player software’s!!

After the news broke and a few pre production QT Pro’s were seen doing the rounds news on Qingting died down a little and they seemed to be nothing but a vapor ware company, however a few months ago QT released their all in one desktop the QDT, which you guessed it looks surprisingly like the Apple iMac.  Unlike the QT Pro we have actually spotted QDT’s for sale for around 3000RMB ($450) , but they don’t look as nearly as good as they do on QingTing’s website (which we’ll come to in a moment). 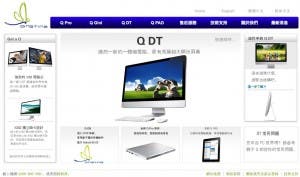 Again they went quiet and seemed to be laying low, presumably due to a warning from Apple to stop ripping them off. But now they’re back! with a feature packed website (with a very familiar design) and promoting QingTing’s new QPad!! Which will run QOS, QingTing’s port of Google’s Android! 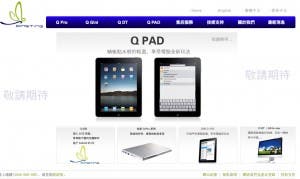 All the images on the QingTing website seem to have been lifted directly from Apple’s with very little (if any) alteration other than Apple logos and trademarks being removed. There’s even a picture of the QT Pro next to a Aperture software box!!
They do seem to have removed their Magic mouse and bluetooth keyboard clones however, but hopefully they’ll be back soon with a clone of the newly released Apple Magic Track pad.

We’ll keep an eye on the QingTing site which you can visit here:

And let you know of any future developments from our new favourite Chinese brand!

Next $90 Android Tablet with Samsung CPU and GPS