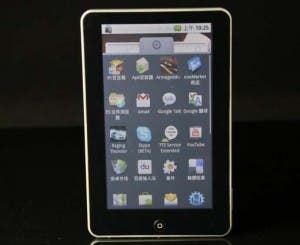 It seems like a week doesn’t go by that a cheap Android based iPad knock off rears it’s ugly head. As someone who has had hands on time with a number of the cheap Shenzhen made Android pads and Apple’s iPad I can honestly say that the iPad is in a different league! Sure it costs up to 10 times more than the knock offs, but it also has a major feature that the cheapo pads don’t….. It works!! It’s as simple as that the iPad works and Apple have nothing to really worry about until later this year when the official Google pad is launched, which I sure will be pretty darn good.
Regardless of my views the Shnezhen factories will keep pumping these overgrown touch screen PMP’s out of their doors until the public stop buying.
But! Could this one be a little different? It certainly seems to have a much crisper screen than has been previously offered, it also comes in the latest 7inch screen form factor which seems to be all in fashion now, it also throws in 3G connectivity and GPS! Now, this is getting interesting!
The HaiPad (Great name!) is not only smaller than Apple’s iPad it is also much lighter, more than half the weight actually at 335g, supports Flash (but only advertisements as yet) has a built in web camera/camera/video camera, offers expandable memory, plays HD video and runs Android 2.1!
We’re going to keep our eye’s peeled for this one as it may be the first half decent Droidpad to hit the market!!

Previous iPad and iPhone 4 Coming to Unicom Next Month!?