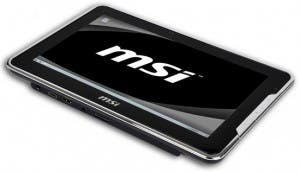 September is set to be an interesting month for gadgets Apple may or may not announce a 7 inch iPad and new Apple TV and now MSI could possibly be launching their Windpad 100.
The Windpad 10.1 inch touch screen tablet was first shown off in prototype form at Computex trade show in Taipei and is apparently all set to go in to production.
The rumorued tech specs seem pretty good too with a Windows 7 O.S, an Atom Z350 1.66Ghz cpu, 2Gb of ram and a 32GB solid state hard drive ensuring better battery life and a very snappy boot up.
The classy looking black faced tablet has a contrasting white back and a range of ports and plugs (HDMI out, SD card reader) located along the bottom edge.
If all that’s not enough this $499 tablet also comes complete with a docking station which will not only charge the device but also give it extra connectivity via 2 x USB plugs, audio jacks, another HDMI out and a VGA plug.
It all looks very promising and has a bargain price to boot! We’ll keep you up to date with more news, but here are some photos for you to oggle over.