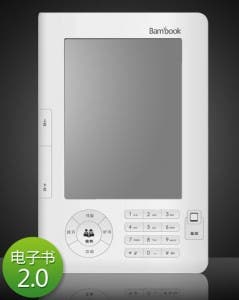 Shanda games are one monster of a company not only do they have a huge portfolio of online games and are reporting record earnings this year, but now they’ve decided to jump into the very popular ebook market.
Shanda alreadly have a service known as Shanda Literature and are now intergrating that service into a Kindle like store complete with their own awesomely named Bambook ebook reader.
As Kindle books are not available for sale in China, Shanda could be on to a winner with the Bambook service.
Shanda have teamed up with China Mobile to sell the WIFI and 3G enabled Android powered Bambook, and have seen a huge amount of interest. So much so that the initial release of 3500 limited units sold out in only a short time and were later found for sale online for double the retail price!
Ebooks are becoming big business in China, with a huge number of local manufacturers producing Kindle like device for around 1000 yuan and bigger companies such as Sony hitting the market with their readers, but Shanda might have the market knitted up thanks to their huge online databases.

Previous 100km Beijing Traffic Jam is Expected to Last For a Month!!

Next MSI Windpad Tablet To Launch Next Month!