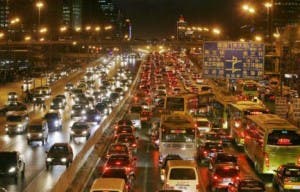 The Beijing-Tibet expressway has slowed to a crawl and has gathered more than 100km of traffic due to road works. This coupled with several small fender benders has created a traffic jam that has already lasted 9 days and is expected to last for a month!

Stranded drivers have been forced to kill time by playing cards with one another, while local merchants march up and down offering instant noodles at 4 times the regular price!

Traffic police have been sent to the most serious areas, but officials still estimate it could take a month to clear the congestion!

Previous Exclusive: Hands On With The ePad Android Tablet