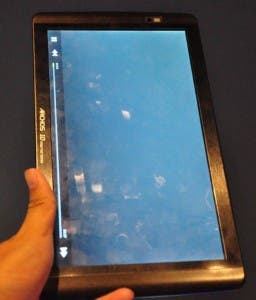 Archos have just shown off 5 new Android tablets and the Chinese press are reporting that the newly revealed Archos 101 (101 refers to the 10.1 inch multi-touch screen) could be an iPad ‘killer’! It’s a fairly bold claim, but can the new kid on the block really hold it’s own against the established daddy of tablets?

Well the 101 certainly has some great features that iPad owners can only hope for on iPad 2. Built in web camera, a USB plug, HDMI out SD card reader and it’s pretty light at 480gram weight are all plus+ over the iPad.

It is possible that all these features and possibly more will make it on to the next generation iPad, however there are two areas where the Archos is always going to triumph over the Apple. Number 1 is price. The Archos costs a full $150 less for it’s 16Gb model compared to the 16Gb iPad, and still has all those extra features. Apple aren’t likely to up the spec and drop the price of an iPad 2. The second area the Archos wins is Flash. The Android 2.2 O.S is soon to get full flash support, this for the Chinese market at least, is going to huge as most Chinese web pages rely on Adobes media software for content. Apple (Job’s) are never likely to back down on their anti Flash campaign.

So the iPad could be pretty much kicked aside in the coming months could it? Well not quite, there is the fact that the Archos doesn’t have a 3G option or GPS, the iPad has both options (at a cost) The Archos is also using Android, which has definitely proved itself as a mobile phone operation system, but has yet to prove it’s worth in the tablet arena.

So place your bets now! Who’s going to triumph the tablet wars?

Next iPhone 4 Gets Network License, Launch Date and Price For China Launch