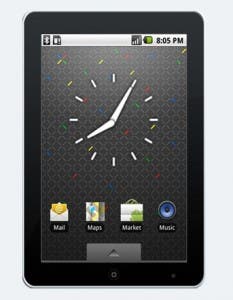 Shenzhen Encore have just launched two great looking Android tablets with 7 inch or 8 inch screens and a choice of either Android 2.1 or 2.2.
The features look fantastic too!

The 7 inch model named the M702 (when will they give these tabs interesting names?) runs Android 2.1 on a Telechips Arm II CPU. Memory is 256mb ram and 2Gb of built in storage which can be added to with SD cards (2Gb-32GB are supported).
If the 7 inch resistive screen proves too small you can hook the tablet up to your TV via its built in HDMI output.
Other great features include a 3 mega pixel camera, built in 3G and GPS. There’s even a choice of a black or silver model.

The 8 inch M802 packs the same impressive specs, but with a few upgrades such as Android 2.2, 512MB of Ram and a higher spec Cortex A8 CPU.

Head over to Shenzhen Encore’s site here for more details, and tell them Gizchina.com sent you if you plan to buy one as you might get a discount!!