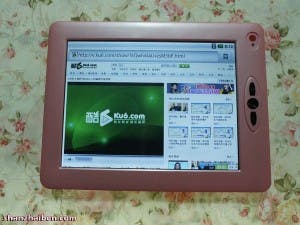 But why make it so ugly!?

Full spec and pictures after the jump.

Finally, a Chinese made tablet that has broken the mold (and not just due to it’s terrible appearance!) and has upped the stakes in processor power. The Aishou PV210 uses a Samsung sourced Cortex A8 1.2 Gh/z CPU with 512Mb of RAM! These are the specs we expect an iPad 2 to be running! not a $200 Chinese tablet.
The 8 inch screen is a bit of a let down being a resistive model, but it does support 2 finger multi-touch.
There is also 4Gb of flash memory, micro SD card slot, HDMI out and a claimed 6 hour battery run time (from a 2600 ma/h battery? We think not!) and Android 2.2.

It’s just a shame the Aishou has been beaten with the ugly stick, attached to the front of the ugly bus, which happened to be falling off the edge of ‘Ugly Canyon’.