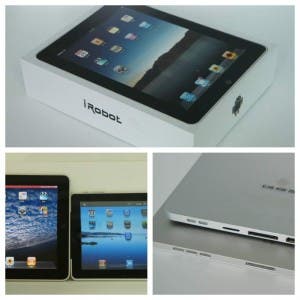 This little tablet has put me in a tight situation! I’ve really been trying to get away from branding every Chinese made tablet that came along as an iPad clone. Sure I’ll always make the comparison to the iPad, but I’ve really been trying to keep away words such as fake, knock-off, clone and copy when introducing them, but now we have real images of the iRobot and I can’t help but point out it’s obvious forgery of the Apple tablet. 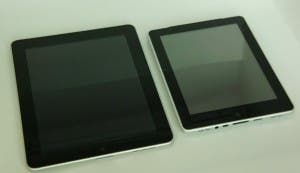 From the outward appearance you get the usual iPad look, but that’s to be expected, all tablets have large black bezels and touch screens as default. 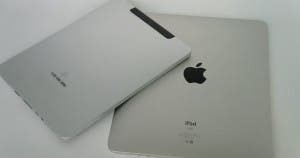 The back however does whiff of cloning! There’s no real need to made the rear look like a 3G iPad, although the black plastic antenna shroud is functional in improving signal strength.
The 30 pin dock connector also looks familiar as do the speaker holes and mesh. It’s not all the same though as the iRobot gets 2 speakers (stereo! the iPad is mono!) an mini USB and a Micro SD card reader. 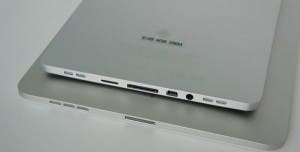 When we look at the size of the iRobot compared to the iPad we see a real difference. The iRobot looses almost 2 inches of screen real estate to the iPad, which either means the iRobot is more portable than the iPad or more cramped when in use. In this case I’m taking the glass half empty approach and saying it’s cramped to use and hardly brings any extra functionality to the iRobot. A good sized smart phone would be easier to carry and applications would look pretty much the same on a 4 inch touch screen as they would on the iRobot’s 8 inch touch screen. 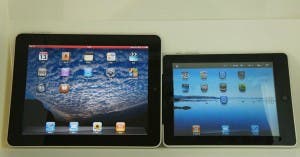 It’s when we boot up the iRobot though that we can’t help but scream ‘Clone’, ‘Fake’, ‘Knock-off’. The Android O.S has been heavily and successfully skinned to imitate iOS on the iPad complete with dock. The only big give away is the distinctly Android task bar at the top of the screen.

And finally there’s the packaging! 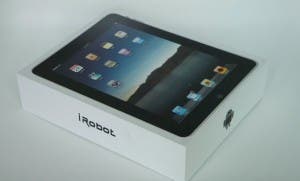 What more can we say!

So from now on I’ll try my best not to stamp every Chinese tablet with the iPad clone tag, unless they fall in to the iRobot camp of full immersion cloning!
Images courtesy of Shanzhaiben
Words Andi Sykes

Next Chinese Supercomputer Officially the Fastest in the World!