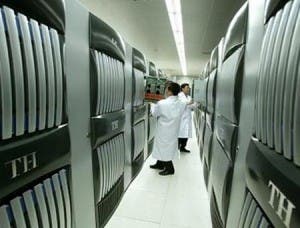 The Tianhe-1A system at the National Supercomputer Center in Tianjin, is capable of making 2.57 quadrillion calculations per second, knocking the former number one system, the DOE’s Jaguar in Oak Ridge Tennessee to the second place.

The third place spot on the list of 500 fastest, which can be viewed over at www.top500.org, is also situated by a Chinese machine called Nebulae.

Although China now has two of the fastest supercomputers in the world both the Tianhe-1A and the Nebulae use processors from American companies, however this is expected to change in the next year or two when Chinese processor technology will be on par with U.S technology.

Previous The iRobot Tablet Forced Me To Cry ‘iPad Clone’!