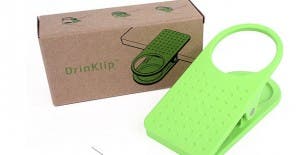 It’s only 40 days until our favorite old bloke with a red suit and fetish for reindeer slips down our chimneys and swipes your mince pies and takes a wee nip of your dry Sherry!
So 40 days until you get a new gadget or two! Good! But 39 shopping days until the big day! Bad!
Fortunately for you we at Gizchina have decided to put together a few gift ideas and will post one or two every couple of days.
Some will be awesome! some will be expensive! some will be cheap! and others will be utter garbage! But thats all relative as we move on to …..

Falling neatly under my wife’s ‘utter garbage’ category and my ‘cheap useful’ category the Giant Peg, officially known as the Drinklip, is already capable of filling your Christmas morning with controversy, contempt and wonder as you learn new ways to clips things to surfaces you didn’t realize things needed to be clipped too.
The colorful plastic device was originally conceived to allow student or those with very little desk space to safely stand their scalding coffee on their crowded desks,

But as with most ingenious ideas the Drinklip has been drafted in to other roles too. 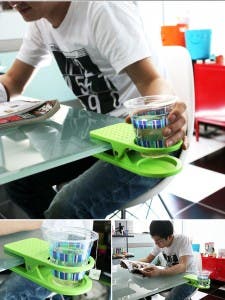 You could even use it to hang your Christmas stocking up on Christmas eve!
Available on Taobao for around 5 Yuan
More gift ideas later this week!

Next Top 5 Sony Clones This Year (So Far)

ILIFE Santa has a $60 discount coupon for you and more