BYD (Build Your Dreams) are known to me for their automotive car cloning shenanigans. They are also one of the largest battery manufacturers in the world and have a consumer electronics department which seem to be gearing up to enter the mobile platform wars.

The 2 devices BYD recently had on show are a 8.9 inch tablet device and a 3G Android smart phone.
Alice Tablet 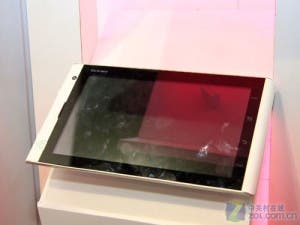 The Alice has been featured on Gizchina in the past, but she’s kept herself out of the spot light for a few months. Now, she’s returned with a Tegra 2 ARM 9 processor ticking over at 1Ghz, a choice of 512 or 1Gb of RAM, Bluetooth, WIFI, electronic compass and mini USB ports.
Despite her lovely name and potent internals, the Alice is one ugly looking tablet device! 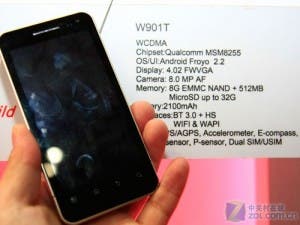 Who ever named the Alice has either been fired or had a bad day when naming this 3G Android smartphone. The W901T runs Froyo 2.2, has a 4.02 inch screen and a 1Ghz Snapdragon CPU. WIFI, GPS, Bluetooth 3.0 and a 8 mega-pixel camera make up the rest of the specification (which is surprisingly similar to the new Acer smartphone spec sheet).
From this picture we can also see the BYD W901T seems to get a similar external antenna design as the iPhone 4, we wonder if they’ve managed to iron out the dropped call problem?
Via: Chinitech