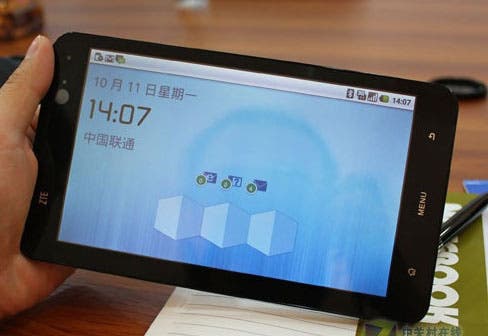 Wow, these sales figures may not be up to Apple standard, but for relative new comer (in foreign markets) to sell tablets in these numbers is pretty outstanding.
Outstanding sales usually means one of 2 things low price or an excellent product! So, which do ZTE have? Check out full details after the jump.

So what makes the ZTELight such an attractive buy?

Let’s take a look at the specs (get ready for some surprises!).

The ZTELight, also known as the V9 gets 512Mb of memory, rear facing camera, bluetooth , micro USB and an Android 2.1 (upgradable to 2.2) OS.

Hang on a moment it seems I’ve missed some very important details! No, I’m keeping the surprises until last!

Knowing that the ZTELight (V9) has sold so many units you would probably be expecting it to be packing some serious hardware under it’s iPhone-esque exterior, well you would be wrong!

The CPU is a Qualcomm MSM7227 600Mhz processor (based on an ARM 11 chip) rather than the industry norm 1Ghz, the screen is also a bit of a surprise as its a resistive unit rather than a capacitive one!
Not the most powerful or most cutting edge of beasts but this lower end hardware means the V9’s 3400mAh battery will last 5-6 hours of continuous use! 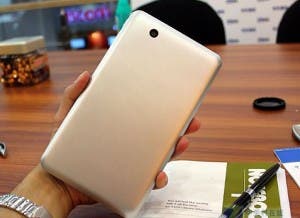 The surprises are still coming though as there’s 3G, 3 mega-pixel auto focus rear camera and built in GPS!

The O.S is 2.1 out of the box but can be upgraded to 2.2, however the ZTELight won’t support Flash 10.1. This might disappoint a few, but to us it seems like a very sensible decision from ZTE’s engineers. That 600 Mhz CPU would probably have a hard time running Flash, we know from personal experience the majority of 1Ghz tablets (including the Samsung Galaxy) have a hard time with Flash! Flash support would also have eaten away at that impressive battery life too!

On paper the spec of the ZTELight isn’t that spectacular, but when you look at the unit as a whole, a small very portable tablet with great battery life, GPS navigation, 3G and WIFI connectivity and a nippy (for most tablet applications) processor and great auto focus camera, you’ve got a great performing tablet that people are willing to buy.

Yes, it gets a lower quality screen, but this helps in the battery department, and also allows more to be squeezed in to the specification without huge added costs, and it can’t play Flash (something I personally think is overrated!) but you can download free applications for most of the popular video sites which will work much better anyway.

Price for the ZTE is roughly 3200 Yuan or $485 which is half the current price of the Samsung Galaxy Tab (in China)!

Overall a pretty amazing product at a pretty reasonable price!