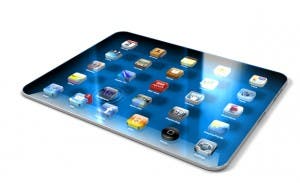 The iPad 2 is out and has been a major success for Apple, even with a few concerns with the extra heat the ultra thin tablet generates and the fact that some users are experiencing some issues with light bleeding from around the edges of the LCD screen.

But these rather minor issues are no where near enough to quash the mighty rumor mill that Apple has pulsating around it.

According to some sources close to the mighty granny smith corporation Apple will be launching a new iPad as early as September this year!
The iPad 3 will benefit from a lot of the upgrades we were hoping for in the iPad 2 but didn’t get such as; 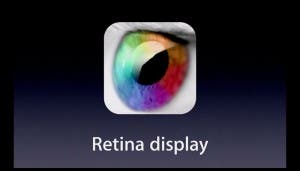 According to the rumors found over at this Chinese website, the iPad 3 will get a Retina Display that will boost the tablet’s current pixel density from 132ppi to a whopping 326ppi.
There is no doubt that a 10 inch Retina display would be a welcome addition to the ultra portable tablet, but will the cost of these higher density screens drop enough to make them viable, and what about the extra power consumption of these screens? Apple will surely want to keep the operation time of the iPad line at 10 hours, but will they manage too with the higher power screens?

Everyone else is doing it why not Apple? But that’s not really how Apple works is it?

Apple are notorious for being super stingy with SD card readers. The Macbook Pro range had to wait years to get them, the Air has only just got one, and only on the 13” and the base level white Macbook still doesn’t have one!
Although a long shot, an SD card reader on the iPad makes a huge amount of sense!. 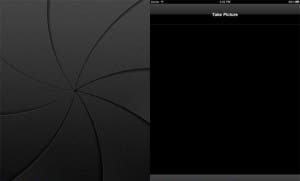 The iPad 2 has already been used to make music videos and with that dedicated version of iMovie for iPad 2, it makes sense we’ll see more people making home made movies on their tablets. The addition of a flash would improve low level light filming and would barely take up any extra room too.

Steve Jobs and Apple keep referring to the iPad 2 as a Post-PC device, yet the first thing you need to do when you buy one is to activate it by PC!
To be a true Post-PC device would mean the iPad become completely self sufficient, this would likely be introduced by way of on operating system update….

Built in HDMI out

Yes, the iPad 2 does support HDMI our, but only with a specific after market Apple adapter which costs $39. A built in one makes much more sense for something that is expected to be carried around and very rarely needs charging. It’s not likely you would want to carry extra cables with you when using an iPad, so why carry a HDMI adapter? 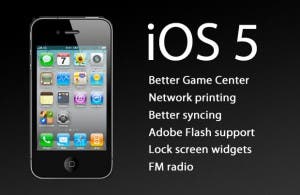 While it’s likely that the iPhone 5 will be the first iDevice to receive the next version of iOS, it is important for Apple and it’s user base to ship the iPad 3 with the latest version of the ‘magical’ mobile operating device. Remember the original iPad didn’t receive iOS 4 for a good few months after it launched, by which time the iPhone and iPod had already received multiple iOS 4 updates!

It would be a real gamble for Apple to launch the iPad 3 so soon after the iPad 2, but it might be just what is needed if Apple intend to keep ahead of the mounting competition from Android, Blackberry and HP’s WebOS platform.