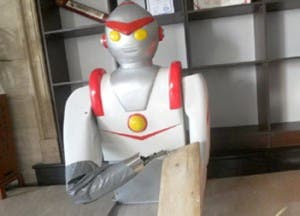 Chinese inventors have a certain love affair with robots, it may possibly be due to most 30 something Chinese having grown up on Transformers cartoons or the Japanese Ultraman show, whatever the reason if you give a Chinese inventor enough time, materials and a problem to solve the answer he or she will inevitably come up with is to make a robot.

Cui Runquan a 35 year old chef who specializes in Dao Xiao Mian is one such inventor who has decided that his work can be improved by using a Ulraman mimic robot with special noodle shaving action.

You see Dao Xiao Mian is a special type of noodle dish which requires a chef to stand in front of a boiling pot of water for most of the day shaving individual noodles from a lump of dough.

The 35 year old chef from Hebei decided he’d had enough of sweating in front of a pot all day and so built a robot to do the job.

The robot is apparently so good at shaving noodles that a company in Beijing has approached the inventor to mass produce his creation!

Previous iPad 3 To Be Released September? Plus Details!

Next China’s Homegrown GPS Will Generate 400 Billion By 2020