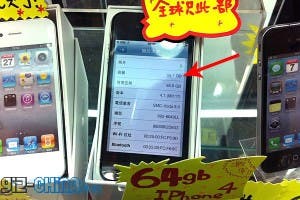 Another 64Gb iPhone 4 has been spotted for sale at an electronics plaza in Hong Kong. Like the previously seen larger capacity iPhone 4’s this black model (nestled between a horde of white iPhone 4’s) has had it’s identifying marks replaced with a group of ‘XXX’s’ and only turning the phone on and looking at it’s system profile shows that cavernous storage capacity.

What’s more the serial number found in the system actually shows up as an invalid product number when searched for but looking at similar codes that are valid we can guesstimate that the 64Gb iPhone was produced sometime in early 2010.

It’s still anyones guess as to if Apple will officially launch the 64Gb model of their popular smartphone, or even if we will officially see the white iPhone 4 in stores, but if you happen to be in Hong Kong and fancy picking this one up be prepared to fork over over 11,000 Yuan ($1700!!) for the privilege of being the only kid on the block with a 64Gb iPhone 4!