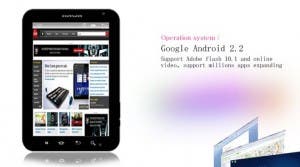 It took the Shenzhen factories a while to get on to the 10” tablet bandwagon (probably due to screen shortages due to the original iPad) but now they’re on they’re not getting off anytime soon.

This 10” tablet from Dawa gets a great spec and a rather Samsung Galaxy style design. 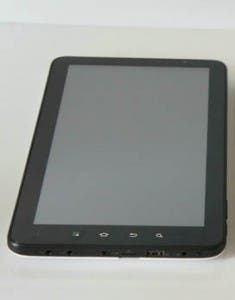 The CPU on the Dawa D9 is a Freescale model based on the popular A8 ARM architecture and running at a sprightly if not supersonic 800MHz. On the memory front there is 512Mb RAM which should help out in the video playing department, then there is 4Gb of built in storage plus micro SD card reader which will except 32Gb cards.

Other nice points are the built in 3G which supports EVDO and WCDMA, a front facing web camera, HDMI out and a 4 way accelerometer for gaming.

O.S is of course Android and in this case it Froyo flavored 2.2, but we expect a Gingerbread update to follow soon.

Previous Xoom Gets SD Card Expansion Thanks To Devs

Next Intel’s Oak Trail Has Found Fans With Chinese Manufactures