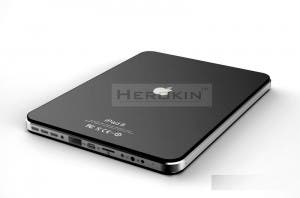 Rumors about a possible mini iPad or 8” iPad from Apple keep surfacing and disappearing then re-surfacing again.
Although it’s an exciting roller-coaster ride of speculation for us, the constant too’ing and fro’ing is too much for some, so much so that someone at Shenzhen based Herokin decided to stop waiting for a possible iPad nano and just make their own!

The device is an 8” Android 2.2 tablet with a A8 Cortex CPU running at 800Mhz, and gets USB, SD card reader plus optional GPS, web camera and external 3G (although they are working on getting 3G built in a some point).


While the renderings here have the tablet branded as the iPad 8, Herokin have no intentions of releasing it with such a name and will be shipping the lovely looking 8 inch tablet as either the kPad or Aero 8.

We plan to get a test unit soon so keep your eyes peeled for a full review.

Thanks to Dandan for the info and all her help!

Next Confirmed: Meizu M9II In Development!