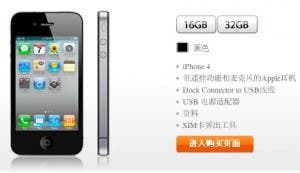 China Unicom, the second largest mobile phone carrier in China, have announced that they will be offering the iPhone 4 without a contract at their main service centers across China.

The move has added to the speculation that both Apple and China Unicom are clearing their inventory of iPhone 4’s in preparation for an iPhone 5 release.
Earlier this week an Apple store in Shanghai began selling iPhone 4’s without restrictions, despite Apple’s China website claiming the company no longer had stock.

China Unicom will be especially willing to get rid of any extra stock of the iPhone 4 before the iPhone 5’s release, as the mobile network provider are having huge problems shifting stock of the previous iPhone 3GS due to the overwhelming desire for Chinese gadget fans to have the latest tech.

The iPhone 4 without contract will cost the same as the contracted version, 4999 Yuan for the 16Gb ($765) but won’t have additional monthly fees and will be unlocked for use on any carrier.

Previous iPhone 5 Could Launch in 3rd Quarter After All!