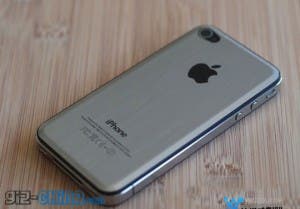 We we’re naive enough to think that rumors of an iPhone 5 launch later this year had been quashed with the news that the much delayed and much sort after white iPhone 4 is supposed to make it’s long over due debut as within the next month or so…. Well we were wrong!

As you may or may not be aware the iPhone 4 has been selling like hot cakes here in China and popularity has far out stripped supply with official Apple retail stores and Apple Chinese website both stating that the iPhone 4 is out of stock.

Imagine our surprise when a number of Shanghai Apple stores suddenly announced earlier this week that they do in fact have stock and had lifted sales restrictions so customers were once more able to buy more than one iPhone at a time.

Apple are always keen to sell out any current product before the latest greatest incarnation arrives, and many Apple fans have taken the sudden unrestricted sales of the 4th generation iPhone as a nod in the direction of an iPhone 5 on the horizon.

Of course Apple have denied the rumor and have said the stores were acting by their own initiative rather than following a company wide strategy of ‘out with the old in with the new’.

But the rumors are still there and they are gaining some hard evidence to go with them!
SK Telecom in Korea have already announced the iPhone 5 will be announced in June at the WWDC and will be in store after a week of launch.

Commerce Times, a Taiwan based news paper claims the iPhone 5 will ship in the third quarter of this year, citing parts manufacturers for Apple products in Taiwan.

And analyst Brain White from Ticonderoga Securities believes the iPhone 5 will launch in June or July and will hit the market by September!